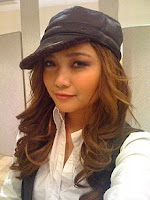 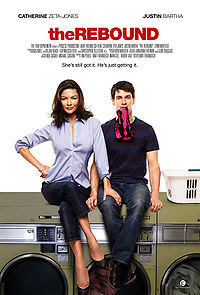 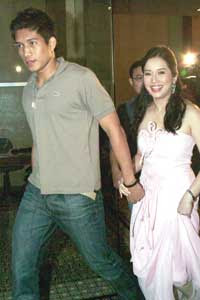 For my foreign readers, Okrayan in gay-slang means Heckling in the English language.

This was a tiring weekend. My sister had a D & C and completely turned my weekend schedule topsy-turvy. I didn't get to go to the wedding of my favorite god-daughter and practically stayed in this weekend. But family will take care of family.

This was one weekend where I channel-surfed through the talk shows and noontime shows on local TV, watched the pirated DVD version of "The Rebound" (just goes to show how readily available pirated CDs are and how Edu Manzano really did a fu*k*d up job as Optical Media Board chair before Gibo's camp decided to make him run for VP), started on a new book "Ford County" by John Grisham, on a lazy restful weekend.

Watching the talk shows and noontime shows made me almost puke. But hey, HBO and Star Movies were all re-runs. GMA had SOP and ABS-CBN had ASAP. Can I just make some feisty but constructive criticisms? Ahem...excoooooooooooooooooooz me, but the GMA honchos have to to realize that Dennis Trillo CANNOT and I say it with conviction, CANNOT sing! Puhlizzzzzzzzzzzzzzzzzzzzzzzzz!!! Shut the guy up! I hate to say it, but the guy may have the looks but definitely DOES NOT have the voice! Let's not get to the point of being insulting to someone's senses! Can you puhlizzzzzzzzzzzzzzzzz discover some singing talents? And DO NOT make this guy sing! He's like some crazed drug-addict rocking along with other talents. On to Channel 2. Caught the act of Charice Pempengco doing some rap number! The girl can belt out and sing!! But she has bad diction. All that practice in the US and she still can't pronounce the words well. If not for the lyrics that float on the screen, I had a difficult time understanding what she was singing. Perhaps she should get some speech training course or something. With all that moolah she apparently makes, it's gotta go to improving herself and her career. After all, if you can't take care of the goose that lays the golden egg, she'll eventually grow old and end up singing in some bar in a foreign land or probably as a character for Hong Kong Disneyland!

After getting really tired of the bakya crowd, I decided to just watch "The Rebound".

Catherine Zeta-Jones is absolutely gorgeous in the role as the 40 year old housewife who get's a divorce from her unfaithful husband (who gets a blowjob in a children's party), runs off to New York City with her 2 kids and makes a career of her penchant for sports when she used to be a stay home mother. Justin Bartha is the 25 year old guy who has just had a "divorce" from his girl friend (wife?) Elise, who marries him for a green card. The paths of these characters cross each other in the oddest of two people who are coming from a failed relationship.

The humorous (but cheezy) love story of this movie, however, stands out on its own as it evolves and apparently sinks into you as a "not so ordinary" May-December love affair. Each of us have our dreams, and our rebounds. And we're entitled to happiness, so long as we respect each others boundaries. I highly recommend this movie to those who look forward to a relaxing weekend.

After the movie, I had switched back to the local channels for the update news on Kris Aquino and her apparently "shouting spree" with one, Mayen Austria because of her husband James Yap. I got it first from the newspapers, but then wanted a follow-up. Of course, there are always two sides to the story. Whatever it is, my take on this is simple - DON"T F**K around with a married man (or even someone in a relationship). Only desperate or sick people do this. Even if Mayen is apparently "clinically depressed", her family should be able to control her libido. As a matter of fact, her family should be there to support her and lead her in the right direction. Kris has all the right to protect her family and claim ownership of her husband. She has to fight for him. Friend or not, Mayen has no business having to cry on the shoulder of James in her heartfelt break-up with her boyfriend. God, if Mayen has this type of attitude, her boyfriend has all the right to break up with her! I wouldn't want to have a relationship with someone psychotic. Let's put an end to this.

First and foremost - even taking for granted it was the guy that was chasing Mayen, she should not even entertained horny hots for him. She knows he is married. Period. Second - even if she is just a "friend", she did not need to seek advice from a married man over her failed love life. She is in a league of the likes of Krista and Katrina Halili. These are the kind of people who think about themselves but do not like the scandal in the end. Finally, she is lucky that Kris only allegedly spat at her. If I were Kris, I'd burn the house of the Austrias to the ground!

Not even the Philippine Daily Inquirer had the right to make a big fuss over a domestic spat. Politics or no politics in this matter, this country has bigger problems. It's really not front page material.
Posted by Kid at heart at 5:11 PM