Sex and the City - The Movie... I was guest to this reunion 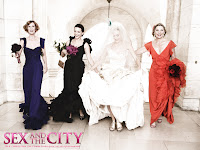 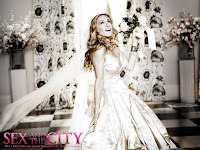 I was told that Sex and the City, the Movie had mixed reviews. "If you're a fan of the series, then watching this 2 1/2 hr film is like going to a reunion. But if you've got no idea who and why these characters exist, it would have been better that you stayed at home and watch the grass in your lawn grow."


Alright, enough with the American critics.

I am not a fan of the series for the very reason that I had no time to start off with the series and like all series go, when you fail to catch it at the onset, you tend to let it go. A few snipets of the series were all my leisure time afforded to me.

I wasn't expecting much with the movie, considering the fact that I was really under the weather (not a good time to go to a movie and review it).

The movie revolves around the lives of four women who have been friends for over two decades set in the heart of Manhattan, New York. Carrie (Sarah Jessica Parker), Miranda (Cynthia Nixon), Charlotte (Kristin Davis) and Samantha (Kim Catrall) whose lives return to the big screen after the HBO series bowed out of television four years ago.

Mr. Big (Christ Noth) returns as Carrie's story begins with still being in love with the same man since the series ended. The lives of the other women are also entwined with the life of Carrie as they struggle to find life and love, struggle with relationships and family. Louise (Jennifer Hudson) plays a short but inspiring role as the personal assistant of Carrie. In her, Carrie finds that "love" comes in the most unexpected. The discrepancy in social status proves that love and relationships traverse these boundaries and have implications in despair and happiness.

Aside from the placid plot, however, is the extravagant costume design. Ms. Parker definitely had put Manolo Blahnik, Louis Vuitton, and Vivienne Westwood on the map with the designer shoes, bag and wedding gown that sent the audience including me, into the oohhh and aaahh mode. And it wasn't only the designer clothes, shoes, bags and jewelry that wowed the audience but the much commercialized high-tech gadgets of the Mac - MacBook Pro of Carrie Bradshaw to the iPhone of Samantha or the humdinger Mercedes Benz S800 limousine series of Mr. Big, to the elegant penthouse in the heart of Manhattan to the fantastic villa in Mexico City, which even the sorrow Carrie was experiencing could not hide the beauteous escapade. (I appreciated the fact that no one was on an iPod - that would have been an overkill.)

The fantastic costume design by Patricia Fields (same costume designer as "The Devil Wears Prada") made the movie a feat for the eyes to drool for. It was like watching a 2 1/2 hour of fashion show on front row!

I felt that I was a most welcome guest in this wonderful reunion where friends shared their stories. For some, it may be finding a superficial part of you where you may get to appreciate and envy the luxuries in life. To me, however, it was finding something beyond the luxuries (of course, those designer items really twinkled beyond reasonable doubt). I wasn't expecting much when I went to this party, but I got more than I bargained for.

And I came out with a smile and promised to get the DVD when it comes out. Watch the movie. You may find your story in the movie.
Posted by Kid at heart at 11:31 AM

Labels: review, sex and the city