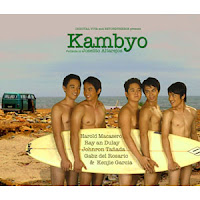 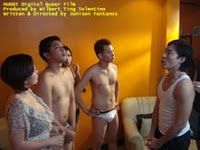 On the entertainment section the newspapers are various write-ups on the latest Indie films (which stands for independent digital production) that are showing at Robinson's Galleria or its affiliate malls that have a theater.

Strangely, the reviews are usually made by the gay publicists and weirdly, majority of the Indie films are nothing but soft gay porn movies which have mushroomed over the past few years. From "Bath house","Roxxxanne", "Duda", "Hugot", "Selda", "Sa Pagdapo ng Mariposa", "Paru Parong Rosas", "Sikil", "Daybreak", "Ang Lalaki sa Parola", "Serbis", "Masahista", "Ang Lihim ni Antonio" and the most recent, "Kambyo" are but a few. The underlying stories behind all these so-called "Indie" films are Filipino callboys, macho dancers, or masseurs - male prostitutes and gay men from all walks of life and their so-called "adverntures" and struggles (?) with life in the madness of the city.

They call it Indie films. I call it exploitation and soft-porn. There are so many stories that can be written, but the writers and producers seem to be "proud" that our gay films are being shown in theaters all over the world in various film industry contests. I find it pathetic and reviling that these so-called producers who probably got a hard-on filming the young boys who were more than willing to strip down and show their genitals on screen in order to get "stardom" exposure are labeling their "masterpieces" as a "work of art". Get real and get a life. This should be the mantra for the people behind the soft-porn gay Indie films as all the movies has no redeeming value and no story line at all. It's simply passionate heat and gay libido at its acceptable limits in the Philippine movie industry.

I'm willing to bet that if we allowed hardcore Filipino gay films to be produced and shown locally, the Filipino will come up with the most acrobatic sex act that the world's imagination cannot even fathom.

The many gay Indie films are highly reflective of the suppressed nature of the gay Filipino in a country that suppresses the iconoclast gay way of life because of the Catholic religious background of the Filipinos. Look at many of the gay fashion designers homes where they have large icons of saints and Sto. Ninos and Virgin Marys in their foyer, yet display debauchery in their bedrooms.

Enough said with it. Deni Rose Afinidad writes about Cinemalaya's Independent Film Festival and Competition and hits the bullseye in the final paragraph. To quote:
"One of Cinemalaya’s aims is to present “narrative features that articulate the Filipino identity and culture.” What makes Filipinos so interesting to people of other countries, really? We are not the Mayans, the Greeks; not even the Autobots, or the Decepticons. What’s unique about Filipinos can Cinemalaya really show aside from poverty?

While Cinemalaya’s objective seems idealistic and promising, until now, “Filipino identity and culture” in indies have come to mean nothing but poverty. Almost all of the festival’s past and present entries and finalists show poverty, if not about poverty itself.

Hence, we are garnering global sympathy, not global appeal, because of these films. if ever these indies receive lauds from foreign filmmakers, it is because these foreigners were sympathetic of Filipinos’ impoverishment; not that the film per se is worth talking about.

So really, what’s the purpose of Cinemalaya and independent films in the Philippines, if they aren’t the hope of the non-existent movie industry in the country?

As it turns out, the purpose of the festival, besides being the “laboratory” of aspiring filmmakers, is to impose control and be out of control—control from veteran filmmakers to new ones; out of control in putting as much ideologies and “symbolisms” only the filmmaker understands.

We really cannot see any motivation in trying to “invent” a movie industry in the country, other than make the young jaded and obsessed with filmmaking, so they’ll fill out our film schools and feed the pride and pockets of veteran, jobless filmmakers.

Independent filmmaking is nothing but an insecure, pretentious field; it can only eternally hope to beat Hollywood, but all it can be is to continuously spring false hopes for Filipinos.

It's now the home grown industry where the boys are gay and are romping around in the Indie movies, to gain access into mainstream cinema. The sad thing here is that even they too are given false hopes. Coco Martin, one of the main stars of all these gay Indie films rebukes the claim that he is gay. I can't say he is or he isn't but he sure is getting to like the flair of male to male sex on the screen and he does it with utmost gusto. And no straight male will want to bed around with other males "just to achieve stardom". And there are more like him; a dime a dozen.

The next screening is just around the bend. Expect more exploitative films that will stir the gay Pinoy's libido. As for now, we're just employing the young and the lustful and fulfilling their utmost fantasies as well. And we're giving the gay boys some skin for the bucks they pay at the movies.
Posted by Kid at heart at 1:02 PM

I totally agree with you. At first independent films were hopeful, and gritty, and were seen as the way to revive the nation's flailing movie industry saturated with worthless chick-flicks and fantaseryes. At first we had good indies, Kubrador, Kaleldo, for example. Now we only have these gay films that reek obscenity. Groups of independent filmmakers should kick out these people who bring shame to independent filmmaking. They don't deserve the indie moniker.

I don't like the indie films about "macho dancers", but indie Filipino films represent more than your narrow definition. They represent an alternative to the dull and falsely romanticized depiction of the country by mainstream cinema.

Three Filipino indies were screened at Cannes this year. Brillante Mendoza won as the best director. No other Filipino has won an award at Cannes' main showcase.

Just take a look South Korea. Due to their efforts to create films that are uniquely theirs, they are now the ones being getting critical acclaim. Hollywood is trying to remake their films. That is what happens when quality and authentic films are produced.