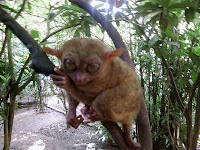 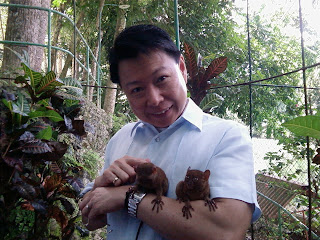 So I've been traveling around lately.

I've never put too much pictures on the places I go to because I barely have the time to sight see. In spite of the fact that I do travel a lot (because of my line of work or the commitments I have), I make sure that I get the engagement done quickly and take the next flight back. Which leaves my body really battered.

Last week, I had the opportunity to go back to Bohol (been there, done that), and since it was a lunch lecture for the Bohol Medical Society, I took the 8AM flight on Philippine Airlines. We touched down at 910AM. When the welcoming party had asked me if I wanted to just rest, I instinctively said - NO. I wanted to take pictures with the tarsiers.

Getting back to Bohol, an island in the Visayan region surrounded by the most serene waters, Chocolate Hills, and yup, the endangered Tarsier monkeys (smallest in the world!).

They are a sight to watch and I wish I could take them home.

But they don't thrive in captivity. Trivia. The Tarsier is the world's smallest monkey. They are nocturnal primates and feed on crickets, arthropods, and other insects. They produce one offspring a year and the female Tarsier carries the baby in her womb for 9 months - just like humans. When taken off their breeding place, many of them commit suicide by self-strangulation (they stop breathing) and die. They cannot live without the company of other Tarsiers.

But the endangered species is just one of the reasons why Bohol is a must for visitors and citizens of this country.

I took the 510PM flight back to Manila and was surprised that the plane was half-filled with foreigners who seemed to have a great tan and had hands full of souvenirs! It's time that the Department of Tourism promote local tourism and offer large discounts for its citizens. After all, it's the best way to educate our kids in social studies.