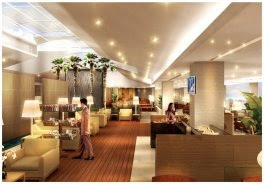 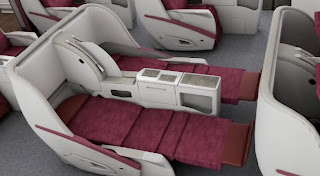 Vacations should always be fun. My trip to Paris was anticipated and I was looking for this respite from all the work and pressures at work.

They say that one should not spend excessively on airfare because the money you save can be spent on shopping. I disagree. Half the fun of a vacation is being pampered to the bones. That means that flying for 19 hours should always be on Business or First Class.

The flight from Manila to Paris took me to Doha, Qatar, as my first stop for the first leg of my flight. I left Manila at 6:55am and arrived in Doha at around 1pm for a mandatory 2 1/2 hrs stopover. The Premium Terminal, reserved for First and Business Class was a seriously dedicated terminal for passengers who wanted a little more than pampering. If you flew on First Class, a BMW would pick you up from the landing area. Business Class passengers, however, were spirited off on a bus that was reserved only for them to the spanking dedicated terminal.

The flat bed and Oryx Multiplex cinema that had over 100 movies, 100 TV shows, on demand games, and music was something that made the trip relaxing. Amenities included pajamas, slip on socks, blinders, and toiletries from Aigner.

The food was a five course meal, with Indulgence snacks being served in between the flight. The crew was friendly and nice.

Upon landing at Doha, in spite of the 37C temperature, the Premium Terminal was clean and modern. Food and wine was overflowing.

Deplaning and boarding was a bus gate. All planes were bus gates. This meant that you landed in the middle of the airport, with the heat at 37-38C, you had to carry your carry-on luggage to the bus that was waiting for you at the foot of the plane, go into the terminal and lug it back to another bus that took you to your connecting flight which was parked right in the heat of the Middle Eastern dessert. And for the next 25 minutes or so, we were baking in the sun on the plane.

But every up side has a down side. On my flight from Doha to Paris, the computer of the in-flight service shut down. It meant that for awhile there was not entertainment, and the seat were all jammed. NO reclining and no reading light. Which was the opposite on the return flight from Doha to Paris. Of all the 24 business class seats, I had to pick one where the reading lights refused to get shut off. And when we landed in Doha from Paris, the parking gates of all Qatar flights were in the middle of the airport! The bus gate took us about 20 minutes from the airplane to the terminal. And this time around, we were all dumped in the main terminal where we were mixed with the coach travelers. The queue to my next flight to Manila was horrible, because this time, I had to mix with the coach travelers. I asked the attendant from the Business Class lounge why we were dumped in the main airport and he replied that if I wanted to go to the Premium Terminal, I had to go down to gate 1 and be transferred back to the Premium Terminal. So much for their Premium Terminal.

The flight back to Manila from Doha was on a 777-300ER, which meant that the plane was spanking new and the videos were all touch screen!

Overall, Qatar Air should be given three stars (out of a possible five) for their mediocre ground service, but five stars for the in flight service and entertainment.
Posted by Kid at heart at 8:22 PM