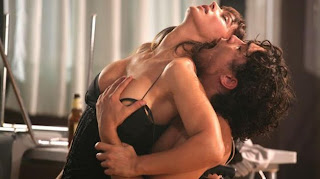 So which of the aforementioned words beginning with the letter "L" is the reason why you're entangled in a relationship?

Interestingly, studies show that the number one reason for attraction between two sexes (or even within the same sex) is physical in nature. Considering sex as a factor, studies show that men prefer lust, loot, looks and love in that order, while women prefer loot, love, lust and looks in that order. Considering age as a factor, the younger generation (those less than 30 years old) prefer lust over loot over looks over love in that order, while those more than 30 years prioritize love over loot over lust over looks in that order.

Women are more confident about themselves and are more practical when it comes to relationships than men. Men have the "wham bam, thank you maam" bravado. Unfortunately, as men age, their bravado yardsticks begin to tame down as well. Ho-hum, so much for the bravado. This probably accounts for the fact that men (especially gay men) engage in relationships out of LUST more than women.

The younger generation understandably have their libidos and raging hormones guzzling up their groins. It would be unmistakable that they plunge into a relationship out of LUST and are in search of LOVE in the most unexpected time and place. And while they're out carousing the various chat rooms on the internet for Mr Wonderful or Miss Fantabulous, they're checking out the vital statistics and the likes rather than the bank accounts.

Of course, these are just statistics from various polls. Polls are reflective of a cross-sectional data, which mean that they are reflective of opinions at only a single point in time. What may be the opinion or preference today may have been different 3 decades ago and may differ even a year from today.

Given the 4 Ls when deciding to initially engage oneself in a relationship, which do you consider FIRST?

Perhaps one of the greatest considerations in the current scenario is money (or loot). Being in a relationship with someone who has loot is being practical. While you may have the looks, these eventually fade with time. Some people even go to the extreme extent of rationalizing that if you've got the moolah, the "pogi" points increase and the value of the individual notches up higher than hunky good looking stud at the corner of the room who's bulging muscles and crotch-line is probably bigger than his pocket. Besides, it's easier to fall in LOVE with someone who can give you a slice of heaven and purgatory, more than someone who'll take you to hell.

And so the paradigm on establishing relationships has shifted gynormously over the last decade (in the era of technological advancements). Money, my friends, seem to be speaking louder than the "face that launched a thousand ships". Nowadays, if you've got the cash, then you're a great catch. Let's get real, I'm sure no one would give a second look at Pacman if he were his old poor self. But my gosh, now that the boxer is a billionaire a million times over, he's got his balls being rubbed even by the lustiest and bustiest girls like Paris H.

So who says money can't buy you love?


IF you're in a relationship (or plan to get hitched soon), look in the mirror and ask yourself deeply - was it out of LUST, LOOT, LOOKS, or LOVE?
Posted by Kid at heart at 1:37 PM