The opening of PF Chang in the Philippines, in particular at the Alabang Town Center, was a much awaited event the past week. With over 200 of this chain restaurant, PF Chang is widely popular in the United States. The first time I tasted the dishes of PF Chang was in the US, where some of my Filipino friends would invite me to dine out in this "Chinese" bistro whichever state I would be in.

While I'm not a fan (and I hope my friends don't get offended because I think some of them think that PF Chang is their definition of "Chinese" cooking), I took the time out to have dinner at the first Philippine branch located in Alabang, Muntinlupa.

Like all newbies, this restaurant was overflowing - either out of curiosity or because some were already fans. The Alabang area is the enclave of the rich and famous in Metro Manila. And while you have the A and B crowd in this part of the Metropolis, you also need to consider that the A and B crowd can get picky and tired of the same food over and over again on weekends. Which makes me wonder why for the first franchise PF Chang, Alabang was chosen as the venue to be. I doubt if the people in the Quezon City area would flock to Alabang just to have a taste of PF Chang!

The ambience at PF Chang in Alabang is a sight to behold. And unlike most the PF Changs in the US, this one stands out uniquely as one hip, chic and bold looking restaurant akin with all the modernities and yet ancient history of Chinese heritage. 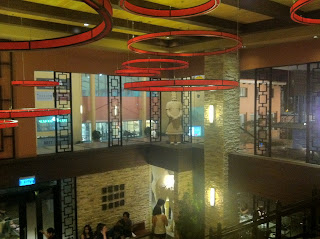 The service was impeccable. For a newly opened restaurant, the servers were polite, cheery and delightfully professional. Food came on time and the waiting time was not unduly long despite the packed crowd. It was good that we had reservations and that the restaurant accepted reservations. It is always a fair suggestion to guests that when you dine out, please make sure you have a reservation so that you all don't end up starving and irritable like the other "walk-in" guests. There were foreign (American) servers who are actually here for a month or two to train the local people.

If you're into bottomless iced tea - you need to try to Tamarind Iced Tea. It's something the US market doesn't carry and it's very Filipino. It actually tasted great and refreshing.

Obviously, I cannot blog about all the food on the menu because we simply had the Spicy Shrimp for appetizers 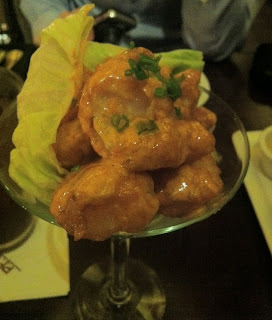 which was hot and crunchy.

And then we had the famous Kung Pao Chicken, Salt and Pepper Prawns and DanDan Noodles for our main course. 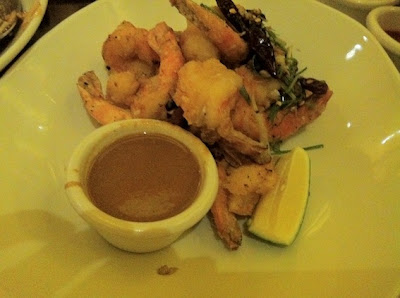 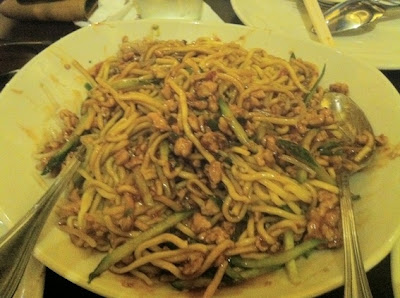 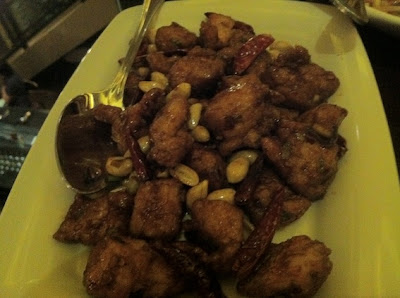 The presentation was neat and clean and the servings were good enough for 2-3 people to eat (a bit smaller than the US servings).

Now for the verdict. While the place has potential, the food was not "Chinese" authentic enough. While it is supposed to be a more "fusion" type of Chinese dining, there is something lacking in the gustatory sense of PF Chang meals. The freshness of live seafood was utterly absent and the food tasted very western in origin lacking the Asian flavors and spices and "everything nice" to stimulate the senses of taste and smell. The food wasn't bad tasting, but it wasn't the kind that I'd really recommend friends to go to. It was, after all, just another chain restaurant from the US that lacked the authenticity and audacity of true Asian cooking. The food tasted like "fast food" meals that had staple preparations and no master chef required.

Total bill - P2150.00 ($50).
Recommendation - uhmmm....not really and I'd still recommend King Bee over PF Chang. I would still prefer to dine where the food is good and worth it rather than just dine with the bourgeois just to say that one was "sighted" dining where the stars dine. I've always told my readers that movie personalities will say anything for free meals or get paid to endorse things that are only good for their personal gains.
Will be back - uhmmm...not if I'm paying.
Posted by Kid at heart at 11:08 AM