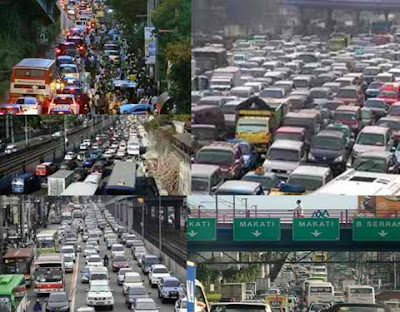 Perhaps I don't get it. Or perhaps some of the people in the government just don't get it either.

So when CNN Go featured the Philippines as the THIRD worst country in the world to drive in, Metro Manila Development Authority Chair Francis Tolentino was on the defensive. Featured on prime time news, Tolentino drove around Metro Manila and challenged the viewers and the detractors on the real scenario of what it's like to be driving around Metro Manila.

It was obvious that Mr. Tolentino did not apparently factor in the fact that (1) it's summer vacation in the Philippines and therefore the sheer volume and true picture of driving in Metro Manila was underestimated, (2) he was probably driving around during less peak hours (but it's true mostly every where else in the world where the roads come to a virtual standstill during rush hour), and (3) it was sparklingly sunny outside and we all know that during the rainy season the streets of Metro Manila virtually become the Venice of the East.

What floored me was the fact that during the short interview, Tolentino admitted to the public that "we all know that the major cause of traffic include public utility vehicles like jeepneys, colorum busses and tricycles and pedicabs not to mention people who jaywalk in the streets and the sidewalks that are used as stalls". Well golly gee wow - since Tolentino knows that these are the major sins of the streets of the metro, what the hell is the MMDA doing about this? I mean, really. Come on! You know what's wrong and if you don't make it right then there's something really wrong with you having to head the MMDA!

It is understandable why the roads in the Metro are the way it is (believe me when I say that even the more urbanized areas in the provinces are the same). It's because of the sheer lack of discipline among drivers, especially the public utility vehicles. And the reason for turning the other cheek, so to speak, is the fact that all this lack in discipline is driven by a lack of political will in the local government units. You don't solve a problem by tweaking minor details like imposing number coding. You attack the problem by attending to the major root - in this case the utter chaos on the streets because even our own law enforcers DO NOT enforce the law. Tolentino lacked the balls to acknowledge that even the MMDA officers and local government traffic enforcers do not tend to the anarchy of public vehicles. These traffic aides are more busy at catching those who violate the number coding scheme, because simply said, there is more the mulct from private car owners than the pathetic public utility vehicle driver.

I see them busy texting even when the traffic is already gridlocked and most (if not all) of them have these public utility vehicle drivers breaking the law right in front of their very eyes! I once told a traffic enforcer to catch the jeepney driver who was loading and unloading in a non-loading and unloading zone. He just looked at me and walked away! Sanamagan!

Like I said, it will take a real leader with political will to address the chaotic problem of traffic in Metro Manila. The key word here is instilling discipline. It's either we sink or swim with the idiots.

Of course, I need to take my hats off to Tolentino for creating the Apps for the MMDA which is downloadable on any iPhone (and I guess there's an Android version of it as well?) It has been a great help navigating some major thoroughfares but it presumes everyone that drives has an iPhone. Nevertheless, this is NOT the answer to easing traffic congestion in the Metro. We need to see more discipline instilled on both enforcers of the law as well as the public.

On another note, while watching the evening news, there are talks that one congressman is enticing investors in putting up Disneyland in Clark, Pampanga. They drew the statistics that one of the largest number of tourists that flock to Hong Kong Disneyland are actually Filipinos.

And while theme parks are actually a good source of revenue for both the country and the investor, I think that they need to seriously look at the practicality of putting up such a grand idea in the country. What the news people forgot to ask was did they factor in the weather condition in the Philippines? During the very rainy season, these theme parks are practically useless. During the very hot summers, who would like to get baked in open air? There is nothing fun at both these scenarios and one need not look far. Enchanted Kingdom at Laguna did not take off as a desired local destination theme park attraction. The other factor that they forgot was how many people from our neighboring countries (read - Foreign Tourists) would really come to the Philippines to enjoy a theme park vacation in a province far far away from the Metro?

If this is not studied well and carefully, we would be the laughing stock of Asia where we lure investors without doing our homework.

Rather than address the major problems of graft, corruption, and discipline - we choose to rationalize much of what our country lacks by painting a rainbow over the stench of poor political will. We need to get our act together so that we can truly promote the Philippines as a reason for business, for tourism, for health, and for finding a second home.

Seriously.
Posted by Kid at heart at 6:56 PM