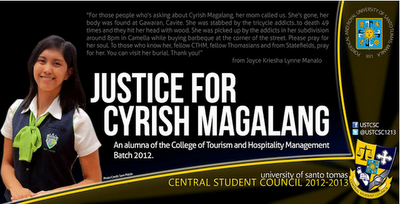 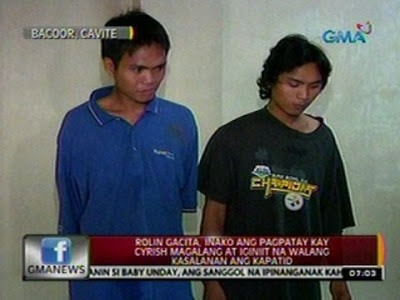 From the ABS-CBN news desk, this was what was in the media report of the side of the Gacita brothers:

"Rolin, in an interview with radio dzMM's Rated Korina, admitted to killing the UST alumna while he was under the influence of drugs.

He said Roel, also a tricycle driver, picked up Magalang. He then told his brother to go to an area where he killed the Thomasian alumna.

Rolin said he stabbed Magalang with a screwdriver and then smashed her head with a hollow block.

He also insisted that his brother never had a hand in the crime. He also denied that he raped Magalang.

Rolin claimed he has no other criminal record, saying he was only a simple tricycle driver who sidelines as a vegetable vendor.

The interview was a startling revelation of no remorse on the part of the criminal. He was able to aptly describe (in spite of his being in a drugged state) the senseless gruesome act that he committed.

The sheer fact that he claims that he has had no criminal record and that he was "only a simple tricycle driver who sidelines as a vegetable vendor" is hogwash and a pathetic excuse to make him look like a sheep in wolf's clothing. There is no such this as a "simple" driver. The mere fact that the killer is hooked on drugs is a crime in itself. There must be a more thorough investigation on how the alleged killer was able to get prohibited drugs, who the source (or drug pusher) is, and get to the bottom of the prohibited substance industry.

Methamphetamine HCl (otherwise known as Shabu) is one of the most common substance abused drugs in the Philippines. Otherwise known as poor man's cocaine, Shabu thrives mostly in the poorer communities of the Philippines. It is estimated that almost 80% of those living in the slum areas have used shabu in their lifetime, while 60% of these 80% are regular users of shabu. Obviously, because of its euphoric effects, its users range from the very poor to the affluent in society.

Shabu is a stimulant and a psychotropic agent in the amphetamine class. Ephedrine and amphetamine carry similar chemical structures, which makes it easy to manufacture methamphetamine HCl or Shabu in any ordinary backyard laboratory.

What makes Shabu appealing to drug users is not only the low cost for getting high - it's the getting high part. Shabu induces mania, euphoria, increased libido and self-esteem, alertness, self-confidence, and increased energy. Because of these effects, almost 95% of prostitutes in the Philippines test positive for shabu use.

You can always detect a user. Symptoms of heightened alertness, diminished fatigue, weight loss or no weight gain and no appetite, constantly thirsty with dry lips yet looks dehydrated (you'll notice this among some of our movie personalities or models), excessive talking and during the "high" stage, shabu users are awake all day. When the drug's effects wears off, the user begins to crash and this is when they become violent, aggressive, and confused.

Drug addiction has become a large problem in the Philippines. Drug mules are a dime a dozen with China executing several Filipino drug mules who want to earn a quick living and dash for the execution chamber. The irony here is that the Philippines and Jejomar Binay are quick to dash on the next plane to ask for a reprieve for the crimes they commit. Crimes that bring shame to the Filipino people as a race. Crimes that we commit in our own country and cannot seem to grapple at containing this heinous act of drug peddling.

I don't think we get the picture clear here. I am sure that we have military officials and government officials that are the biggest fish here. If you don't have the highest people in the land coddling these drug pushers, they won't exist.

And the problem won't go away until the President of the Philippines wages an all out battle against what destroys and kills the very future of our people. It's not the Gloria Arroyos or the Marcoses or the Chief Justice that should be his major agenda. It's sending a message to an all out war against the very core of what kills the Filipinos. While it may not get "pogi" points as political vendetta, it is the right road (read - ang tamang daan) to take.

I sympathize with the Magalang family on the loss of Cyrish. Dreams snuffed in one senseless act where some "simple" tricycle driver gets high on drugs because he has a scuffle with his wife and gets a tantric moment and goes on a killing spree. The "simple" tricycle driver has really no role in life. He was born to what? Get high on drugs and become a murderer? How much more sense could you put into this picture?

Do our leaders have the balls to rise beyond politics? Do our government officials even have the brain to think about this picture?

Next year as we troop to the polls to select local government officials, think about it. Are the leaders you vote for in this for serving the public in where and what and when it really counts? At the end of the day, it's really up to us to decide whose hands we put the state of our nation.

No one to blame but us.