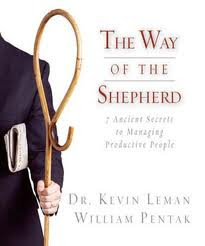 Shirard gave me a book entitled "The Way of the Shepherd".

On first glance, I wondered why he would even give me a book about shepherding. And while I am deeply connected with my religion, I had no plans of becoming a priest. I threw it at the back seat of my car. It took me a few days to even reach for the book. While caught in heavy traffic, my driver fuming at every turn of non-moving vehicles on EDSA, the 123pages of the book lay there.

The first page starts with THE INTERVIEW. The author of the book, a young reporter tells the story of his encounter, interview and role in the life of Theodore McBride, one of the most respected business leaders in the United States and McBride's mentor Jack Neumann during McBride's graduate school. The book is written in simple silly conversation mode and while it may not be a topnotch writing on the part of Pentak, McBride picked the right person to write his story as it came out written from the perspective of a friend guiding you along the way.

The book takes a different perspective on leadership, using the Shepherd and his shepherding ways and tools as the guiding principles of leading his flock. Alright, so we're not sheep!!! That's the first thing that came to my mind as I was busy poring into the book. But then again, as Neumann would compare later, we are like sheep in more ways than we can imagine when it comes to following the leader.

Each chapter of the book covers the different steps at people management. I can relate to that. Maybe some of you who read my blog are current managers or have been managers or even plan to be managers in the future. I manage a lot of people wearing several hats at a time in my multitasking world. And this book defines us as either shepherds of a flock or simply being in a managerial position because we need a job.

And there's the difference between the two.

Chapter 1. Know the condition of your flock
Chapter 2. Discover the shape of your sheep
Chapter 3. Help your sheep identify with you
Chapter 4. Make your pasture a safe place
Chapter 5. The staff of direction
Chapter 6. The rod of correction
Chapter 7. The heart of the shepherd

Many managers just focus on the task and getting things done. Nothing wrong with that. But we forget sometimes that it takes team effort to see a project through. In short, a task is never ever achieved with ONE person. A project is accomplished because of several peoples efforts. And while we preoccupy ourselves with work, we sometimes forget that it takes the flock to become a shepherd. The state and nature of your flock reflects on how well your shepherding skills are.

In our very busy schedule, we often make the mistake of being insensitive to our flock. We really don't care if one quits or one dies or one gets maimed along the way. It's the hallmark of a tyrant and a bad leader. We need to care a bit more about the people who work for us. If we don't care enough, they'll never reciprocate dropping everything just to follow you. "People don't care about how much you know until they know how much you care."

Choosing the right sheep is essentially to getting the task at hand done. In the hospital setting, I sometimes hear people moan and groan about things not getting done and things being all the way awry. Let's face it. There are moaners and groaners. They don't do anything except complain complain complain. They're tiring to hear. They have no ideas to share. Worse, they bring the whole organization down. We need to know the S.H.A.P.E. of our sheep. S-trengths, H-eart, A-ttitude, P-ersonality, and E-xperiences. Attitude is key in my book. You may have the person with the best personality but if you've got a team member who has a bad attitude, your group will never get anywhere. He may be the star surgeon of your hospital but if he's got an attitude of an Ass...they'll have a negative effect on your team and every management meeting will be back to square one. These are the people who think that the world is all about them.

The sheep need to identify with you and you can only do that by building trust, integrity, modeling authenticity and showing compassion. Every good leader has to remember that role modeling is the most important part of the job. How can you mentor a flock of residents if your training officer happens to be asking for out-of-town trips from pharmaceutical companies left and right? What's the message our students get when the Dean is never around except during commencement exercises or when he/she has to rub elbows with the priests? "Remember: Leadership is not just professional. It's personal."

Keeping your people well informed makes the pasture a safe place. No hush hush or secrets behind their backs. Tell them up front what's the problem, how you intend to solve it, how they can participate in the equation. We need to rake in everyone to play for the team! And getting rid of chronic instigators is part of the equation. "Some people in life aren't happy unless they're unhappy. It takes just one person like that to destroy the collaborative effort of a department."

We can never sit on a problem. When we give time for it to hatch, it becomes a problem that's difficult to get rid of. We need to act soon and deal with the problems before it infects the flock.

I never knew what the Shepherds staff was used for until I read this book. It was interesting that the staff symbolically provided direction to the flock. And when directing, we need to use persuasion rather than coercion. Even among my patients, parents always tell me "Doctor, you have to tell my son/daughter to do this or else...". I sit down with them and ask them (alright sometimes I want to slap them) what the problem is all about. I always tell them that people can only follow you because they trust you not because they fear you. That's why you're the leader and they're the follower. They need someone to guide them. But you can't just make them do something because you don't like it. We need to probe deep and think about why there is resistance. Is it you or is it them?

The rod of correction is interesting because it explains how, as leaders, we can Protect, Correct and Inspect our flock. As leaders, we need to fight for our sheep. We cannot just cow down at every disappointment. A great leader will always defend what is right and what his flock stands for. He/she will not stand only for his own selfish interest. Leaders who flip-flop or only look after their own hide are not fit to lead a flock because when they attempt to correct the flock, the flock will never follow the leader. Who wants to follow a spineless urchin?

And finally, there's the heart of the shepherd. The core of all leadership is how much you're willing commit yourself to your flock. It's not easy just leading a team. If you're never around for every little problem they have, then you're not fit to lead. The heart of the leader carries a high price tag. He may have all the money in the world to buy empire after empire, but people don't really trust his leadership because he looks after them. It's because they need the job and that he can afford to pay them to be hirelings. "What distinguishes a great leader from a mediocre one is that a great leader has the heart for his people. He can focus on both his people and the job in the long run, and will never leave them to fend for themselves."


How do you lead your flock my friends?


"The Way of the Shepherd" by Dr. Kevin Leman and William Pentak
Posted by Kid at heart at 6:22 PM