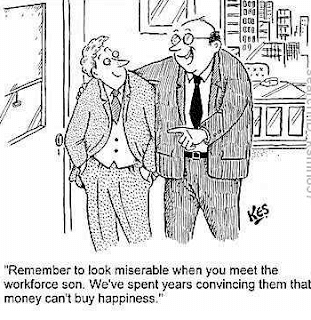 Who doesn't like to be making tons of cash? I know some people who even bend back ethics and morals as long as their bags (and bathtubs) are awash in cash. After all - it makes the world go round, it makes you buy all the best things in life, and even on a temporary basis, yes, it even buys you happiness.

While cash is a necessity in order to live, survive, and yes, remain sane in our day to day existence, at times the end does not justify the means. The operative word being "justification".

The other week at the clinic, the parents of one of my patients had told me that she was giving birth in a few months. I congratulated her! Then the grandmother said that the obstetrician would be doctor so and so...I remarked, "why?, wasn't your OB so on and so forth two years ago?" They said yes, but that the obstetrician was building a house. And I understood what they meant.

It's not only in the medical world that this scenario is seen. We all try to make a decent living in order to fulfill our dreams. Some of us want to own houses and condominiums in posh villages. Others want to drive brand new European cars or send their children to high-end schools even if it is beyond our budget.

And this does not occur only in the upper and middle class families. My driver is a prime example of this. He has three children and the youngest is 3 years old. While he sends his two older children to public school, he sends his youngest to a semi-private nursery school. I asked him why and he said that the other two are boys and they have the tendency to drop out of school and be lazy. But because his youngest is a girl, she will most likely study harder and be the breadwinner of their family later on in life. And while I have nothing against dreams and ambition, there's a thin line in having to sacrifice the rest of the family by being pretentious.

Pretending to be someone or something that one isn't is the greatest deceit of all. Whether it's a relationship, a job, a business - pretending to be adept at a task in order to profit for wealth (and the temporary happiness) it provides can prove to be uncanny at the end of the day. There are people who are not fit to run an organization because they have no knowledge about how to run it well except the fact that they base the selection of managers based on trust and not on competence. It creates problems in the work force and becomes frustrating for employees whose bosses pretend that they know so much when they know so little, and the work force is not appreciated back no matter how hard they try.

Here are five pointers to remember:

1. There's no point in using limited life chasing unlimited wealth. When we all die, we can't bring the wealth with us. Even if your casket is made of gold.

2. There's no point in earning so much money if you can't live to spend it. Sometimes we spend our lives chasing the money that we forget the people we've trampled upon just so we have more material things in life. We forget that life comes full circle. If that money isn't meant to be for us, karma is such a bitch at getting it back.

3. Money isn't yours until you spend it. And earning it rightly is just as proper as spending it and sleeping well at nights knowing that it was earned well.

4. When you're young, you use your health to chase your wealth. When you're old, well, it's sad that you use your wealth to get back your health. Happiness at any stage and at any age is not all about money. It's about being true to yourself and being just with the people around your lives. The trouble is, often times, it's too late. Your children don't know you. Your friends have left you. Your family won't even care if you lived or died.

Finally,
5. Man is happy not because of how much he has, but how little he needs.

Think about it...what buys you happiness?