Love him, Hate him 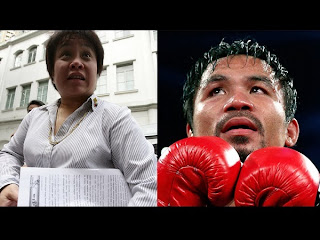 He's iconic in the realm of boxing. Manny Pacquiao, the Philippines greatest boxer ever, has the fairy tale story most people would dream of. From dirt poor to one of the world's highest paid athletes - yeah, even I take my hats off to his phenomenal success. Better known as Pacman, the gargantuan fame and fortune that came his way was beyond anyone's dream. And while his fights were without a doubt some of the highlights of boxing history worldwide, so were his earnings. His statement of assets and liabilities (SALN) to date puts him at over Php2,000,000,000 (which we all believe is probably an understatement)...that's more zeroes than a regular calculator can punch out.

There's no doubt on the legitimacy of his earnings. While Pacman ran for Congressman in his district in Saranggani, General Santos, and won (he is currently in his second term), he was hardly around during the sessions in Congress. His paltry attendance stood out like a sore thumb. The position was there, but the man running and representing his district was not. His excuse - he was busy training and fighting those fights which would bring accolades to his countrymen. When he was chided for his absence in sessions in congress, media and people close to him brushed it aside. Whenever he was criticized for his ineptness, it was always one big holler that everything hurled against his incompetence and irresponsibility was a political ploy. Let's call a spade a spade. He was never even fit to run as Congressman for this district from the get-go. He is a boxer and that's all he knows. Nothing wrong there because boxing is his first job. It's the main source of income, his daily bread, and the reason for maintaining his current lifestyle. You can say that in terms of wealth and success - Pacman has arrived.

But here's the rub.

A few months ago, I had written a blog about doctors and other professionals regarding taxing our professional fees. While Bureau of Internal Revenue honcho Kim Henares was running after tax evaders, the media AND the public did not take too kindly on professionals who were not remitting their taxes correctly. There was even a proposal to place the Menu for Professional Fees plastered on the walls of our clinics and the BIR began publishing in the newspapers the taxes that various establishments paid during the past year.

The average family and general physician practitioner earns a measly amount compared to Pacman's earnings. One fight of Pacman would easily put me and my family in Nirvanah for the rest of our lives. Most of our earnings are loose change for the BIR. Seriously, I don't think I would even make the same amount of money that Pacman makes in one fight in my whole lifetime as a doctor. The facts are easy to calculate. The HMO makes a killing from those who pay their insurance coverages. The average doctor gets Php250-300 (minus tax around Php225) for every patient seen on an out-patient and Php400-Php500/day gross, for every patient admitted to the hospital. If one saw 10 patients a day, that would mean a net earning of Php2,250 a day of practice and 12% of which we will still to remit as Value Added Tax (or Php1,980 net). If he/she practices 5 days a week in the clinic and has 5 or 7 in-patients with an average stay of 4 days for each hospitalization a month, that would sum up to Php14,000 gross (deduct 15% withholding and 12% VAT or a net of Php10,220.00) for a net total of Php65,440.00 a month. An amount where even a product manager for a pharmaceutical company or even an assistant operations manager for a call center would consider much lower by professional standards.

Unless the doctor is a surgeon by profession, the actual average net income of most of the doctors would range from Php 40,000 to Php 75,000 per month. Or Php480,000 to Php900,000 a year. Not assuming that there are patients that cannot and will not pay the professional fee. If we waive our fees, we still have to execute an affidavit to the effect that we did not charge the patient! This is not enough to even buy a Birken Hermes bag for oneself!

The last few days, we saw the exchange in barbs and words between Kim and Pacman. Pacman cried foul because of his alleged failure to pay P2.2B in taxes from 2008-2009. He blamed it on politics. To me, it was stupid to cry political ploy alone for the BIR to run after Pacman's millions, errr...billions. In fairness to Kim (it's the first time I'm siding with her), the signs were obvious. Pacman was making more money, owning more assets year in and year out, and the taxes he was remitting were less and less. It is a Philippine law that you need to pay the right taxes to the Philippine government even if you make money from earnings elsewhere as long as you're a Filipino citizen (I think the OFWs are exempted, but Pacman is no OFW). Which means that if you paid only 15% taxes in the US for an endeavor, then you will still need to pay the remaining 17% (32% taxes) in the Philippines.

What is most disturbing with Pacman's press conferences were that he felt he was being singled out. I also wrote in my blog that the government should run after the government officials embroiled in the Pork Barrel scandal first as they were siphoning our money. But some of my readers didn't respond too kindly. To them, what is due to Ceasar should be paid to Ceasar. I didn't argue with that. How could you argue with logic? It was illogical and irresponsible for Pacquiao to even argue along any line because the BIR demand for payment had been there for over 2 years (hence the penalties slapped on him) and that because he is supposedly a lawmaker, he should have known the law! For him as a congressman to turn his back on the law is something that is mind-boggling.

The fact that even Aling Dionisia, the Pacquiao matriarch, exchanged barbs with Kim and covered by media was really a low blow. Aling Dionisia has three houses in her name. But the old lady says she is jobless so how can she pay taxes? What the f*ck?! So what? Being jobless does not excuse her from paying real estate taxes because the houses in General Santos are under her name. The squatter-like response of the Pacquiaos can only reveal their true color of ignorance of the law.

Even if you blame the accountant and managers of Pacman for the fumble in this tax fiasco our "Pambansang Kamao" is facing, we need to own up to our ultimate responsibilities instead of passing the buck. Gullibility is never an excuse for evading responsibilities. Just because he has brought fame for the Filipino does not exempt him from paying his taxes correctly. We are, after all, heroes in our own little way. From the lowly OFW who toils day in and day out in a country far away to the physician who provides heroic gestures to cure the sick and the least of our brethren.

It peeves me that the public, media and fellow politicians are siding with Pacman on this charade. Let him prove that he has no obligations to the government. Let him prove himself that Kim is wrong and that he is right. And let's not drag our dirty linen in public by abusing public trust. As a government official, Pacman owes it to the public to fight this fight in the right venue by producing the right documents.