Of faith and miracles 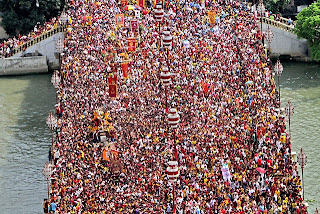 January was a busy month. It was also the month where there were various religious celebrations throughout the Philippines.

With over 85% christians, the Philippines is the biggest Catholic nation in Asia. This perhaps accounts for the frenetic religious celebrations enjoyed throughout the 7,107 islands almost all year round.

In January, the highlight is the Feast of the Black Nazarene and the Feast of the Santo Nino. Then you have the longest holy week in the world. The Filipinos look forward to the holy week by filing their vacation leaves early and trekking to either the province or some nearby country that hosts Mickey, Minnie and Donald Duck. Then there's also the Flores de Mayo, where the Santacruzan and the parade and charade of Emperatriz and their male escorts come a prancing, a dancing, and a glancing along the already crowded streets of the cities. This is followed by the long trek to the dead as All Saints Day and All Souls Day approach in November. This is the Philippines answer to Thanksgiving Day in the United States. Finally, the country enjoys one of the longest Christmas in the planet! Work is abandoned by the 23rd of December (yes, we do not work on the 24th) and hie off to some forsaken place and spend in wild abandon the 13th month pay and Christmas bonuses (which are integral in the payslip of all employers and employees) and return after the merry making on the 3rd of January. Then the cycle repeats itself.

Students and teachers from Catholic schools enjoy more respites in between. Each time a saint celebrates their special day, it's no classes in our country.

So why do I want to talk about faith and miracles in my February blog entry?

First, let me make it clear that I am not bashing my religion.

I understand how some of my friends and colleagues felt during the last Feast of the Black Nazarene. All roads leading to and from Luneta to Quiapo literally was at a stand still. For that very short distance, the procession lasted more than 19 hours, several container vans weighing tons were lifted and moved from the street because of the large crowd, and the streets were laden with litter from the devotees that flocked to the scene.

The number of people that came to the procession, mass and celebration was estimated between 10-12 Million. Mind boggling - considering that this number topped the number of people who came to see the Pope (John Paul II) on World Youth Day in 1995.

Are there really 12 Million devotees to the Black Nazarene?

I really don't know. When I was watching the news on TV, I couldn't believe at the crowd and the mayhem. Beside me was my mom. And she told me a story:

"When you were still in my womb, I almost had a miscarriage. I was bleeding profusely that your grandmother was so scared that we would lose you. After all, you are the first of all the grandchildren she will ever have. Your grandmother went to the Quiapo Church and crawled kneeling down to the altar and begged the Lord for a miracle - that I would survive this, and you would live. A few days later, maybe because of the medicines and the prayers, the bleeding stopped. Your grandmother made me promise that after you were born, that I would be devoted to the Black Nazarene for the next 2 years."

I was startled at the story. It was the first time I had heard about this. And I quietly watched the news again.

And I understood...that it was faith and small miracles like these that mattered most. Never mind the inconvenience for the day. There are just things in life that are kept between God and His works at making us realize that He is part of our lives.