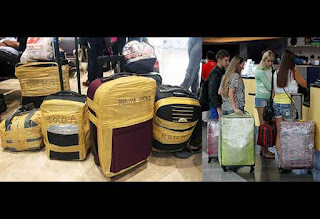 We've always been taught that "if we have nothing better to say, to just keep quiet."

The latest spate of news on the "tanim-bala" or "laglag-bala" has placed the Philippines in the shame map once more.

First, is why would anyone even carry or attempt to carry ONE live bullet into his or her bag? And to have several consecutive occurrences of this event, is even senseless for me! The probability of consecutive "terroristic" or "criminal" activity with ONE live bullet in various individual bags is practically zero. Except of course in the Philippines.

Second, are the various media reports of this scam. Based on the first probability, this can officially be called a scam. What do OFWs, tourists, senior citizens have to gain by carrying a bullet in his/her bag?

Third, is the pronouncement of the people in government - the Aviation Security Group, MIAA Office, DOTC, and of course, Malacañan - that practically washes their hands clean of these "occasional" incidents. Someone just had to open his mouth and make the announcement that it's probably a random chance this happens. Really? Well someone should really just shut up shouldn't he?

Fourth, is the lack of sincerity at the lapses of the airport authorities over this fiasco. Apparently, all the investigations will take some time and that with the total number of people involved, there will be heads that should roll. But you can see how tough the stance of MIAA Manager Jose Angel A. Honrado is regarding the accountability of this fiasco. If this were in another country, the head would have resigned - not out of accountability per se, but out of shame. To say that our government officials in general, are thick faced (makapal ang mukha), is an understatement.

I agree that the airport officials job is to protect the safety of the riding public. After all, air transportation is an integral part of everyday travel during these times. Nevertheless, the human rights and humiliation people have to go through because of a scam, right at our very showcase window, the airport is NOT an acceptable option at any point.


It is never an excuse to protect your friends at the expense of public trust...EVER!