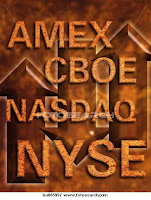 Today's headlines regarding the economy of the world was not good.

The economic problem which began from a subprime mortagage on real estate properties in the United States had escalated to become a global problem. As of this blogging, it has now spilled to England and Iceland has melted away, so to speak.

The stock exchange plummeted in all sectors and this has thrown investors into a frenzy.

They say that the Asian countries are least affected from this worldwide problem, and the Philippine economists are beating their breasts with pride that the among the ASEAN countries, we were the least affected when the stock market dived for the sixth consecutive day in trading.

Okay, so we have the good news on the local economy in the business pages of every newspaper. Heads up with the peso not plummeting as rapidly as the other financial exchanges. But that's the newspaper or errr.... Malacanan Palace reporting. The government is pinning all hopes on the Overseas Foreign Workers (OFWs) for the coming Yuletide season. With the predicted surge in remittances, the financial economists predict that the peso will be buoyed up to P42.00 to the dollar (up from the current P47.75 trading as of this blog).

These are definitely not good times rolling. But if there is one thing that will not halt the Filipinos from doing, is spending for material things. The Pinoys have a penchant for showing off. I have a friend who works for the IMF and is based in Washington DC. She drives a Toyota while her Filipino maid drives a spankingly new Mercedes Benz!

In the Philippines alone, the gadgets are the yuppies best friend. Never mind if they don't eat the right meal or have medications for their illness, as long as they have the latest gadgets, that should make them happy...temporarily.

The other day, I gave a lecture together with two other prominent doctors in the field of Neurology and Cardiology, respectively. The cardiologist, Dr. Romeo Divinagracia who happens to be the president of UERM as well, said that part of the reason why statistics on mortality and morbidity for hypertension and heart attacks have not changed in spite of the advent of good drugs to control these are perhaps due to non-adherence to drugs being prescribed.

When it was my turn to speak, I talked about poor quality drugs that abound in this country and why patients turn to generic drugs. I have nothing against the latter, just the former. Poor quality drugs have no place in any market, because they can kill. Not producing the intended efficacy and/or problems on its good manufacturing practice can pose safety issues, which consequently become lethal to the patient. But the Filipino patient will NOT spend more for medications because they cannot boast of the drug. Besides, treatment of diseases is not drug therapy alone, but also non-pharmacologic (change in lifestyle, eating the right food, practicing healthier living, etc.).

So the stock market has crashed and the problem is global. Right now, the problem seems to have no light at the end of the tunnel...and I disagree with the government that the Filipinos are spared from this global dilemma. With a global meltdown, there will be no place for OFWs in countries that are suffering from the economic glut and the BPO (outsourced business) may get affected as well. As if this is not a double whammy that will slap us right in the face, the government doesn't seem to have a bail out plan when this happens.

Right now, we can only pray that this doesn't happen.