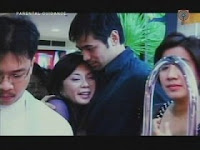 There's the fairy tale story of Cosmetologist Dr. Vicky Belo and General Practitioner Hayden Kho on their on and off love affair. Both doctors and both television personalities, theirs is a story of love and deceit.

Ricky Lo, Philippine Star columnist had this to write about the saga of the love duo:

Yes, Dr. Hayden Kho developed cold feet at the last minute and begged off from appearing “live” in last Saturday’s edition of Startalk where he was supposed to dedicate a “meaningful” song to his estranged girlfriend Dr. Vicki Belo, with himself at the piano, as added feature to his exclusive taped interview. Hayden’s alibi was that he was in Marinduque (his mom Irene’s home province) for a vacation, although those close to him insisted that he never left Manila.

Anyway, for whatever it’s worth, here’s the song titled Too Young (by Jack Wagner) which, I guess, could help melt Dr. Vicki’s “hardened” heart and look at her “Sad Sack” boyfriend with compassionate eyes.

Since I realized that you’re

The most important thing in my life.

I’ve gotta the need to tell you

I know that I was wrong,

Show you how I feel and what’s goin’ on.

I don’t know what to say.

Except I love that girl so much

But I didn’t show it,

Started spreading myself too thin

Fool around, thought she didn’t know it.

Such childish games I played,

I fooled her with my touch.

Time has taught me so much,

I was too young but that’s no excuse,

I had too much too soon

To please my restless youth.

Now all this peace

I can’t feel your bliss.

You treated me so kind, you were all mine

But I just walk away.

That sweet smile and face

Hang heavy on my mind.

Is there a way that

You can turn back the hands?

The more love that precious time I let slip by

I can’t take much more of this.

So I gotta try

To get you back and say.

I was too young but that’s no excuse.

I had too much too soon,

To please my restless youth.

Now all this peace

I can’t feel your bliss.

You treated me so kind,

You were all mine

And I just walk away.

True love comes once in a lifetime

And if it’s true then

You’ll be back in mine.

Add to the fact that ABS-CBN had this to report:

"The camp of famous cosmetic surgeon Dr. Vicky Belo sent a statement to disprove reports that Belo's former boyfriend and fellow cosmetic surgeon, Dr. Hayden Kho Jr., was rushed to a hospital due to drug overdose in attempt, purportedly, to commit suicide.

In a text message to “The Buzz,” Belo Medical Group’s Leah Salterio clarified that Kho did pass out but said it was because of fatigue and not due to drug overdose.

In the same message, Salterio also said that Belo declined to be interviewed by members of media amid reports that Kho allegedly attempted to end his life after the two parted ways.

Reports said Belo initiated the break up after she found out that Kho, who is at least 20 years her junior, had an alleged affair with sexy actress Katrina Halili.

Halili is an endorser of Belo Medical Group. In May of this year, reports of an alleged Kho and Halili relationship surfaced but the two have denied it.

The starlet had once undergone a liposuction procedure performed by Kho.

Citing its sources, The Buzz also reported that Belo and Halili had a closed-door meeting where the starlet allegedly admitted the affair. According to the same sources, Kho allegedly even brought Halili to a condo unit given by Belo.

After the break-up, reports said Kho was rushed to Makati Medical Center and written all over his body was “I love you Vicki.”

The Buzz reported that Kho was already discharged from the hospital and is now in Tagaytay.

In a text message to The Buzz, meanwhile, Halili’s camp denied the reports.

What is revulsive here is the fact that both of these doctors are NOT even Cosmetic Surgeons! They are not accredited by any specialty or subspecialty in the Philippines or in the WORLD! Dr. Kho just graduated and took his board exam. FYI, to be a Cosmetic Surgeon, you need 3 years of general surgery and 2-3 years of cosmetic surgery before you are qualified to take the specialty and subspecialty board. And Hayden is no boy wonder, even in medical school. Belo on the other hand never finished her residency in Dermatology at Makati Medical Center where she started. However, her training did take her places and the snipets of training she did makes her at the very least accredited in some dermatological procedures. But she is NO COSMETIC SURGEON! And you can quote me on that. Please, somebody please shoot these reporters and columnists. Never mind giving so much fuzz about the sleazy sex lives and the May-December love trysts, but to malign the specialty and credentials of respectable professionals!

Shows you how much knowledge (or lack of it) these people in Showbiz have. But I've always said, no greater fool than the fool that was fooled by a fool. Eh ano pa nga ba - ganyan talaga ang tangang Pinoy. Showbiz!
Posted by Kid at heart at 8:20 AM

I totally agree with what you had stated. Not only that, Hayden(being a physician ) has totally disregarded any sense of carrying the profession with dignity. That nude pose w/ halili... what on earth was he thinking? His PRC card should be incinerated.