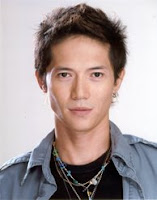 Who hasn't heard of this actor in the Philippines? Brother of action star Robin Padilla, Rustom was a former Philippine Airlines flight steward who later became ramp model then heart throb movie actor. In the late 1990s he married actress Carmina Villaroel. They had no children. Three years later, they separated and Carmina married Zoren Legaspi, from whom they have beautiful twin children.

Rustom had gone his own way and in the 2007 edition of Pinoy Big Brother he became the come back kid. In the show, he admitted he is gay. A revelation that sent the airwaves shush with what those in showbiz already suspected. According to Rustom, it was a Mariposa butterfly that flew to his lap then eventually to his lips while on the set of PBB that made him reckon with revealing his sexuality on the air!

From then on, it has been a hayride for Rustom.

It was a lazy afternoon yesterday when I chanced upon my mom watching some afternoon showbiz talk show. And lo and behold...Rustom Padilla...in drag.

No judgment here. I'm just glad that some people needed to break free in order to find happiness. Accepting one self, no matter who and what he/she is is the first step to finding peace in the midst of a turbulent mind. As to how he takes it from here responsibly will be his most heavy task. There can be a dark side to reality. Not just because one is gay, one needs to flaunt it.

In fairness...this once a upon a time hunk has transformed to a beauty quee(r)n...
Posted by Kid at heart at 12:18 PM