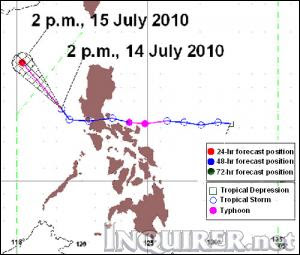 I will interrupt the completion of my vacation blog with a word from our sponsor.

I will take this opportunity, to bash at a government agency. One of my favorite past time.

PAGASA - otherwise known as the Philippine Atmospheric, Geophysical, and Astronomical Services Administration, is a part of the Department of Science and Technology services in the Philippines. Since I can recall, I have to say that the weather bureau in this country has been the worst I have seen in the world. As a matter of fact, ever since I could read and write, I had already doubted the accuracy of weather prediction from PAGASA.

I remember that when I was still in Grade School (which was gazillion years ago), each time the weather bureau would declare signal number 1, I knew that the sun would be out and that it was another day off from school. As I grew older, these beliefs were reaffirmed every typhoon season. Seriously, the weather bureau in the banana republic cannot be relied upon.

If there is anything, at the very least this God-forsaken country should have invested on in the last 9 years at the very least of Ate Glue's administration, was the brains to at least upgrade our weather tracking system. So we were able to automate the election - big deal? The usage of the PCOS machine comes once in every 3 or 6 years (depending on usage). Accurately detecting the weather in the country - especially when predicting when, where, and how - the next storm's path is, is without a doubt a more reasonable investment on the part of the government. But knowing how the government officials think and work - that there would be no long-term kickbacks nor vested interest in the political playing field in that graft and corruption would be minimized because each local government unit would be more disaster prepared - upgrading the weather detection system in the Philippines is not within the scope called immediate need.

To the shrewd and imbecile politician - the misery of a calamity will always be beneficial to him or her. From all the rubbles of mud, flood, dirt, and death is the money to earn from rebuilding and politicking their way around the gullible Pinoys in this country. What better way to show how third world we are, than to make a mockery of even our simple way of predicting where the next storm will hit.

The latest fiasco on how accurate (or not) PAGASA was in predicting the path of typhoon Basyang simply confirms my hypothesis on how lame and pathetic this agency is at predicting the weather systems that affect the country.

On July 13, I knew that a storm was approaching the Philippines. I heard it on CNN at 10am. The weather person was saying that it was expected to hit Luzon. She said that it was taking an erratic route and would either veer north a little bit or change directions and move near Metro Manila.

Of course, PAGASA had a different story. In the afternoon, they declared signal no. 1. This sent the children (even those that were almost 5'10" but were still in grade school) scampering to the malls with their parent(s) in tow! Why was that? What were these parents doing at the mall? There was an oncoming storm.

Outside, the wind was still and the sky was cloudy. The weather was humid and warm.

Before I went to bed that night, I was watching the news on ANC (ABS-CBN News Channel) and the newscaster assured the people of the Philippines that yes the storm was on track for Nueva Ecija, according to weather experts in PAGASA.

A little past midnight on July 14, I woke up because of the blackout. Then the winds began to howl and the windows began clattering. I told my mom that this was a big storm. Imagine that Metro Manila is only under signal number 1 and we could feel the wrath of the storm. Poor people in Nueva Ecija. This meant that the province would have been eliminated from the face of the earth or the Philippine map by tomorrow. If what we were feeling in Metro Manila was only 1/8th of what the Novo Ecijanos were feeling, good luck to them. But the howling and lashing of the wind and rain didn't stop until almost 5am. For almost 4-5 hours, you could literally feel the battering of the storm against the concrete walls of our home.

At 6am, the storm had left. But not after shutting down power in Luzon for 24 hours. To this writing, only about 50% of Luzon has had it's power back. Many places are still without electricity. To this writing, I now know that the storm did not take the path PAGASA predicted. Typhoon Basyang had a brain higher than that of Prisco Nilo from PAGASA. It made a fool out of the latter by taking the path less traveled by most storms - into the heart of Metro Manila.

The following day after the wrath of Basyang on Metro Manila, President Aquino had confronted PAGASA on the inaccurate prediction. Of course, PAGASA was left with no recourse but to admit that its equipments allowed them to release a forecast only every 6 hours and that they were very very old (short of saying antiquated) storm tracking devices. They also admitted that their best meteorologists had migrated to other countries of greener and verdant pastures. It was like saying and confirming to P-Noy that this the best that PAGASA can do.