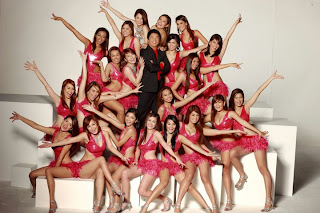 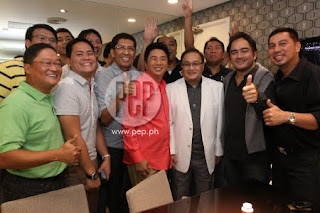 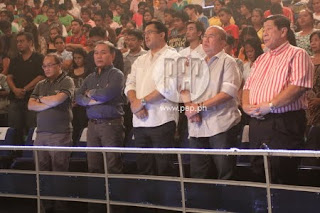 For the record, I am not a fan of Willie Revillame.

It was, however, interesting to watch his new show titled "Willing Willie" on TV5.

The show runs for 3 hours - from 6:30 - 9:30 in the evening. And Willie R is the only host (with Mo Twister on the sideline acting like an emcee for a beauty contest). What's new with the show? Nothing. It simply is a take from the defunct "Wowowee". New sets don the new home studio, but it looks like the same crowd. The sexy dancing girls are gyrating and doing splits to the various music that's bombastically barraging my eardrums. The endorsements are endless and so is the cash!

The take here is that the show runs smack against two major networks' news shows - GMA 7 "24 Oras" and ABS-CBN "TV Patrol". It trickles into the reality show of GMA after 8pm and a telenovela of ABS-CBN.

And here's the kill.

"WIlling Willie" is mass-based. I was telling my mom over dinner that this is one show that the masses will get enticed to watch. Not only because the show gives away money to studio participants, but to home viewers as well. It's like, for 3 hours, you see so much money being given away. This doesn't of course include a jackpot price of a car, a house and lot at Camella Homes (developer is Sen. Manny Villar who happens to be Willie R's business partner for his Wil Towers) and P1M in cash - all in one prize pot!

True enough, 5 minutes after I discussed my take on the show with my mom, Willie blurts out "bakit pa kayo manonood ng news, eh dito sa atin, may pera na nakakatulong pa"! (Why do you want to watch the news when in my show, we give away money and we can help you financially?)

The studio participants are mass-based. They are those who belong to lowest quintiles of society - the C, D and E. They're also his greatest and most loyal fans. They follow Willie wherever and whatever TV channel he moves to. Like the paupers on the streets of Manila, the mendicants will always be avid followers of those that give dole-outs.

But the C, D and E classes make up more than 75% of Philippine society. The segment of society that is most neglected by both the rich and the government.

It is the same class that bands together in order to preserve their existence in the urban jungle. They are rabid and will never understand why mendicancy is a crime altogether.

Never mind if they will look stupid or crazy or dance like a chicken or crow like a lunatic in front of the camera. Never mind if they will share their life story of hardship and financial disarray or broken homes and tragic lives. For the money they can bring home, even if it means licking and sucking up to Willie R, it will temporarily provide food on the table.

After all, the Filipino is used to being beggars in their own nation. During an election period, people will exchange their votes for a measly amount of money in order to provide food or medicine for their family.

While there is nothing wrong about giving money away (I like that thought), the thought that the way the show is being aired leaves a bad taste in the mouth. Today, Willie R talks about the rising ratings of his 3 days old show. Indeed, a 33.8% share of primetime is impressive. And I am sure both Channels 2 and 7 honchos are scratching their heads on this.

It's simple. The ratings game commands sponsorship (TV commercials). The higher the rating of the show, the more commercials it gets. Which means that the show of Willie R can demand a higher fee for a commercial slot eventually. With limited resources, why do you want to put a commercial on a show that has a dwindling follower?

Interestingly, is how the two giant networks will now have to focus on re-inventing their news program. I mean, what will make every Juan de la Cruz interested in having to hear people dying from a bus falling off a ravine or some SK official getting shot during a poll violence or some starlet having a lurid affair with a boxer? Is there money for me in all these cheezy news? Nope! Will it make me P10,000 richer overnight? Nope! Would I care less if the mayor of some pathetic town rolled over and died? Nope! Will it matter to me if somewhere in Paris, the French people went up in arms against their own government? Nope! In short, what would interest the 75% of the viewing public is now focused on what they can gain from the show of Willie R.

If the trend continues, the next 3 months will be crucial. Slowly but surely, there will be a large chunk of TV viewers that will shift gears to watching a game show than watching some dreadful tsunami pummel a country. The latter, after all, does not concern them and is a one time event. If the trend on the TV ratings continue, there will be a change in time slot for the news shows and they will need to replicate a show that will go head to head with Willie R.

At this point in time, it would be interesting to see the turn of the tide. Only two things can happen. Willing Willie will flop and lose it's following and Manny P would have gambled for naught. But Pangilinan, at this point, is willing to stake his balls for the jugular against two giants in the industry. And Willie R is his secret weapon. Why else put him right smack head to head against two institutional giants and primetime news at that?

It does not take a genius to see this interesting battle for primetime supremacy.

Will Willie R have the last laugh?

As they say in showbiz...ABANGAN ANG SUSUNOD NA KABANATA! (to be continued...)

[Photos from Pinoy Gossip Boy and pep.ph]
Posted by Kid at heart at 7:11 PM