Social networking and my next door neighbor


Facebook, Multiply, Twitter, Friendster, Myspace, LinkedIn - these are but a few of the social networking sites in the world.

Danah Boyd from the University of California at Berkeley and Nicole Ellison from the Department of Telecommunications, Information Studies and Media at Michigan University studied these various social networking sites and have proposed a definition for SNS.

Boyd and Ellison "define social network sites as web-based services that allow individuals to (1) construct a public or semi-public profile within a bounded system, (2) articulate a list of other users with whom they share a connection, and (3) view and traverse their list of connections and those made by others within the system. The nature and nomenclature of these connections may vary from site to site."

Over the last decade, technology has advanced in leaps and bounds.

During my growing up years, the closest I and my friends got to knowing other people were through formal affairs. Our parents grew up in the years where the closest they came to with technology was owning a pager which would holler each time someone would need them at work or at play.

Mobile phones are not what they used to be - where you could simply text or make a call in order to communicate with someone. Today's mobile phones are all adrenalized. If you had a phone that is capable of only text messages and calling, you're probably technologically deprived. The adrenalized mobile device has camera, video and internet surfing bundled into a joyous handheld device. Then comes the iPhone 4, which as advertised, has changed the era of mobile phones - it introduces FaceTime.

In 1997, social networking had its humble beginnings. Boyd and Ellison puts the timeline in this figure. 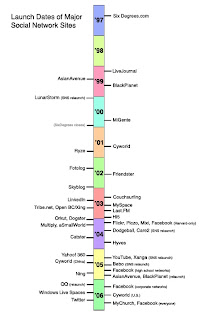 Social networking has its pros and cons.

The major purpose of SNSs is not to meet casual strangers for a tryst or a jump in the hay. Boyd and Ellison point out that "what makes social network sites unique is not that they allow individuals to meet strangers, but rather that they enable users to articulate and make visible their social networks. This can result in connections between individuals that would not otherwise be made, but that is often not the goal, and these meetings are frequently between "latent ties" (Haythornthwaite, 2005) who share some offline connection. On many of the large SNSs, participants are not necessarily "networking" or looking to meet new people; instead, they are primarily communicating with people who are already a part of their extended social network."

This being the major purpose of SNSs, there are opportunists who will turn this really cool technology into a social disaster. By allowing unknown people into your private lives is akin to allowing a thief into the night. When you're all asleep, the opportunist will take advantage of your identity and this can backfire on you eventually. But keeping to a closely knit circle isn't the major purpose of the SNSs. It hopefully intends to expand one's horizons. Getting to know your friend's friends and finding out eventually that some of us have a common denominator. Of course, that does not escape us from knowing that some of our enemies happen to be the best friend of our close friend. Which means that we either get to hate our friends or eventually love our enemies. The latter is so "sick".

For obvious reasons, the interaction is limited to those that have access to the internet or to a mobile handheld device that has internet capabilities.

Why then has SNSs become so popular from the school-age child to grandparents and great grandparents?

The study of Boyd and Ellison show that "social network sites also provide rich sources of naturalistic behavioral data." It's not a matter of being cool and hip and up-to-date with technology and with the times. It provides a source for sharing information, communication, and business arrangements to some degree. Undoubtedly, however, the privacy of our lives is intertwined in this complex technological advance which makes it sort of difficult to separate half-truths and half-lies. This becomes a major concern especially for the younger generation that tend to be carefree and careless when sharing their private lives online. There needs to be some discretion in the kind of information (private or public) that we are willing to share. We cannot all have shout-outs that expose and ruin the remaining privacy of our lives.

A friendly reminder is that SNSs are designed for a purpose. It's not the quantity of "friends" we make or "fans" we have but the quality that eventually counts. At the end of the day, they all won't be at your funeral giving your obituary.

Not all SNSs are actually a wild game hunt. There are those that are exclusive and are shared only by professionals who exchange business information with colleagues. The advantage here is that from one part of the world, we can find counterparts and business opportunities and careers in a country spaced 8000 miles apart.

I for one have been a participant and recipient of the several advantages of social networking. It has played a major role in my career and friends whom I have not seen in the longest time or have not had the chance to say hello to have suddenly popped up from somewhere so that even when distance and opportunities in a far away land has kept us far apart, the SNSs have kept us updated on their lives.

It's like living next door to them...and keeping abreast with their lives once more has somehow made the difficult times easier again.

The Social Network is the movie about the founders of Facebook. It stars Jesse Eisenberg who plays the role of Facebook founder Mark Zuckerberg. Zuckerberg became one of the world's youngest billionaire at 23.

While the movie opened in the United States on October 1, 2010, it is scheduled to be shown in the Philippines on October 26.

The movie is a true-to-life story of Zuckerberg, the man who has changed the way SNSs is today.

[note: The photo is from the movie poster The Social Network. The figure is from Boyd and Ellison's publication.]
Posted by Kid at heart at 7:56 PM