Postscripts from the grave 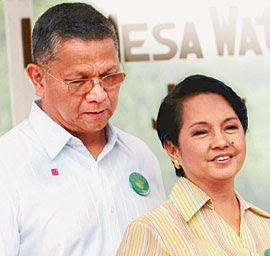 A former AFP Chief of Staff who held several key positions in government after his stint in the military from Ate Glue, who became embattled in the imbroglio of the AFP scandal, had committed suicide.

During the senate inquiry on the AFP scandal - former comptroller Garcia getting a slap on the hand through a plea-bargaining agreement with the Ombudsman, Rabusa spilling the beans on the alleged malversation of funds and former COA auditor Heidi Mendoza revealing the very bad audit trail and alleged cover-up in the military funds - I could not help but want to share my thoughts as citizen Juan de la Cruz on the matter.

And while I was waiting for the perfect timing to write it all down, the perfect storm happens. Angelo Reyes commits suicide.

HIs death has left more questions from the Filipino people, who probably for the longest time, are tired of the corruption in government.

It is without doubt that the average Juan de la Cruz has suffered tremendously and has perhaps become callous with the way graft and corruption has become a lifestyle for government officials. When Heidi Mendoza points out that not all in government are corrupt and that still those in government who join this institution as public service to the Filipino people, this practice has become the exception rather than the rule.

I do not cast aspersions against Angie Reyes. He had an illustrious career. An officer and the chief of staff of the Philippine Army. While he is known for his bravery and his rise to the ranks, he is also better known as the chief of staff of ousted president Erap. He took a stand to defy his commander in chief for reasons perhaps only he will know and which he takes to his grave. And if this is so much of the bravado that was Angie Reyes, Erap's successor undeniably was ridden with more questionable ethics and moral values when she stole the presidency from the rightful winner of a democratic election. Ironically, he stood by her.

Ate Glue had stayed in office because her generals were well rewarded. That, no one can doubt. It is evident that key governmental posts were provided to the chiefs of staff on a silver platter.

But the graft and corruption that riddled the AFP is no different from the graft and corruption in the Philippine bureaucracy. One does not need to look far to see this. From the BIR to the Bureau of Customs to congressmen and other local government officials who utilize pork barrel funds in order to enrich themselves while in public office, they are a dime a dozen. This apparent lack of transparency has numbed the average Juan de la Cruz. If those who serve public office can steal from the coffers of the government, then why not the average worker? And as long as public officials remain exempt from being dragged to court or are incarcerated for enriching themselves in public office, it will be a lonely battle for PNoy who seeks to change the ethical and moral conduct of those in government.

And this is where I beg the indulgence of the Reyes family. You see, after all the flames have been put away, it cannot be underscored that the money used to enrich those in public office come from hard earned money by the average Juan de la Cruz. For us who strive to make a decent living, who toil each day and probably work several jobs or take an exodus and work in dangerous countries in order to provide a better future for our families, the misuse of public funds will definitely catch the ire of every average Filipino.

You see, it is not only you as a family that grieves for the death of a loved one. There is no heroism in the act of suicide of Reyes. He takes to his grave the quest for justice of Juan de la Cruz.

The fact is, that those who serve in government will never be able to enrich themselves or even provide palatial homes or pay for trips for wives and family around the world, or own multitude of cars and bank accounts with how much they earn. And this is what strikes a chord with every Filipino. Ombudsman Merceditas Gutierrez is wrong and lying when she says that there is no way you can pin down ex-Maj Gen Carlos Garcia for plunder. His family have lived the good life while 70% of Filipinos live below the poverty line. His SALN do not match what he has in the bank. His wife, unless she is Jackie Onassis or Jinky Pacquiao or his children will never be able to buy a condominium in New York with how much the husband makes.

The media has simmered down and wrote only the good things Angie Reyes had done during his career as a public servant. And those that have come to his defense are colleagues and comrades who are mostly generals as well.

As a family man, there is no doubt that Angie and all the generals have provided well to their families. How well, is apparent in their lifestyles. Where their children are schooled. The kind of houses they live in. And how disproportionate their living conditions are compared to even the average business manager who seems to have to shuffle in between jobs in order to send their children to school, provide a house over their heads and food on the table.

Angie Reyes, a bemedalled soldier had fought the physical battles in his lifetime. It was unusual that the man who led the destruction of Camp Abu Bakkar would be so engulfed with depression when the time came to prove his innocence from a fight with allegations on corruption in the military.

To the Reyes family - media or the senators or those who casted aspersions against Angelo Reyes did not kill him. An innocent man will always stand and fight for his innocence. I for one would be in a fighting stance if someone maligned my family and my personality. No amount of puny senate inquiry or people who are out to destroy my reputation will succeed in destroying my spirit and resolve to clear my name. There is no doubt that Angelo Reyes earned his medals bravely, but behind his downfall was a more powerful person who had destroyed and besmirched his reputation.

His death was tragic and it left a large void in the hearts of the Filipino people. He took what he knew to his grave.

And justice will remain elusive to the average Juan de la Cruz.
Posted by Kid at heart at 8:42 AM