The circus came to town 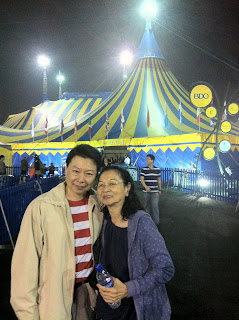 It was a rainy weekend, with tropical storm "Falcon" pouring torrents of water in Manila (and the neighboring provinces). The streets of the metro was flooded and I had to cancel clinic on a Saturday.

Saturday was also the day that my family and I had bought tickets to see the circus that came to town. Le Cirque du Soleil had flown in over P700M worth of equipment, stage, acrobats and clowns for the first ever performance of Cirque in the Philippines. That Saturday afternoon, the weather had cleared and it was a childhood fantasy relived all over again.

Varekai was the Cirque version that performed in Manila. I had bought the tickets way back in February and had gotten good seats. Varekai had premiered in Montreal, Canada in 2002 and the plot is basically a take off from the Greek mythology of Icarus, the fallen angel whose wings had melted after flying close to the sun. Instead of drowning into the sea, he falls into a lush forest and the creatures and plants in the forest teach him how to fly again.

I have seen some of the other Cirque shows in Las Vegas and while Varekai falls short of the much more fantasmagoric shows of Cirque, its setting in Manila at a specially built Grand Chapiteau (circus tent) that was fully airconditioned, provided a good atmosphere to enjoy a circus. The show started right on the dot and the rules on no cameras, mobile phone conversations and other gadgets were fully implemented. On a negative note, I guess the full episode of Varekai was not shown because of the limitations of space, so the show simply lasted 1 hr 30 mins with a 25 mins intermission number.

The highlights of the show were the child performers, the clown acts and the grand finale that got ooos and ahhhs from the audience.

While I guess for those like me who had seen other performances of Cirque, Varekai had provided the entertainment to the locals. And I am hoping that this will not be the last performance of Cirque in Manila.

Varekai runs until July 24 at the Luneta Grandstand. And for those who may still want to catch it, get the tickets at the farther end at the upper rows so you can see the stage in full. We were watching from the very front row and had torticollis after the show.

Until the next circus comes to town...enjoy the fantastic spectacle that only Cirque can provide. It's worth the weekend.
Posted by Kid at heart at 8:39 PM