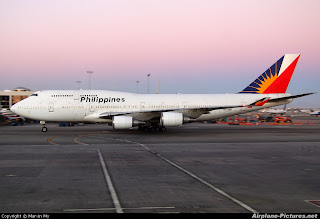 I had to go to Cebu to give a talk last Thursday.

The week before, I was skeptical on the flight arrangements on Philippine Airlines. The strike had practically put most of the flights on PAL to a standstill. The outsourcing plan of PAL was already approved by both the Department of Labor and Employment and of course the office of the President of the Republic of the Philippines. At least 2,600 employees of PAL had to go. They were spinning off most its ground staff and call center to other companies. The latter were also owned by PAL erstwhile owner - Lucio Tan.

When the employees who would be losing their jobs went of strike, both PAL and the riding public ended up losers. According to PAL, they have lost $3M - $5M a day in revenue losses. While PAL was giving chit chat excuses for their massive losses, the riding public was inconvenienced. PAL provided profuse apologies both in media and in flight. They are, according to PAL spokespersons, in a transition phase.

On Thursday, October 6, I had taken the 1245PM flight to Cebu for my talk. When I walked into the NAIA 2 terminal, it was like a ghost town. Only flights to Cebu and Davao as well as International Flights were flying out of NAIA 2. There was very little queue. On the Mabuhay Class lane, it took me about 10 minutes to get my boarding pass. I was tapping my fingers at the counter because the guy at the other end was taking forever. He kept looking at my ticket, then back to the monitor, frowned, back to my ticket, back to the monitor, frowned, then back to my ticket...I had no check in bag. Just myself. After all, I was coming home after my talk on the 1020PM flight. After 10 minutes, he gave my boarding pass but NO apologies for his taking gazillion years to process a boarding pass. I counted sheep - taking into account that PAL was in a transition phase.

At the security check in, the guard reminded me to remove my shoes. While I know that, there were no more baskets for shoes. I always remember that there's a basket for shoes. My Prada bag had to go into the dirty carousel? OMG! My bag was more expensive that the life of that pathetic guard and there were no baskets! Besides, the guy that went ahead of me DID NOT take off his shoes! I told the guard that the guy in front of me did not take off his shoes, so why is he asking me to take off mine? And my Prada bag had to go inside the dirty carousel. Where the hell were the baskets? He just shrugged. Counting sheep and taking into account that PAL was in transition...

Boarding was on time. We were only 6 on Mabuhay Class and the guy at the counter had to put someone beside me on the A330-300 plane. Watdfuk?!?!?!! We could have one seat each on business class and the section would still be spacious! Anyway, it was a good thing that the foreigner just sat somewhere else. He too, was scratching his head and wondering why the hell we were all being put seat together. And don't give me that crap that it provided balance to the airplane. The guy at the check in counter simply didn't know what he was doing. Then the automatic announcement went on - that PAL was apologetic for any inconvenience because they were in a transition phase....

In the middle of the flight, they served snacks. I was used to the original trays that PAL provided for Mabuhay Class customers. The old snack trays provided a bit of chic presentation for the crappy meal they served - some fruit salad, a cup for coffee or tea, some glasses for water or juice, a warm snack in the form of pizza or hors d'ouevre of mini sandwiches and some utensils to boot. This time, the stewardess came out with a tray for herself and started handing out beef calzone (that looked greasily deadly) and a roll of Goldilocks mamon. No tray, just put it on your tray. No white mantle gracing the tray table. She asked me if I wanted water or cola. I said a diet cola. She came out with a glass filled with cola, that looked so diluted that I said, I'd take the water instead. The guy on the other side of the plane was still yacking on his mobile phone while the plane was taxing on the runway. The flight attendants were noisily yakking away on the gallery and no one bothered to ask the guy on the mobile phone to turn it off. One of the flight attendants voice was so loud I wanted to stand up and ask him to shut the f*cK up! We were on the runway for about 20 minutes waiting for the plane to take off. And I could hear the attendants yakking yakking yakking away. There ought to be a requirement that the flight attendants do not talk to each other discussing their pathetic lives while the plane is waiting to take off. It's plain irritating.

We arrived at the Mactan International Airport, 5 minutes off schedule, which wasn't bad. Overall assessment for PAL was dismal. I had to remind myself that they were in transition.

Transition is a terrible and sordid excuse for inefficiency. PAL should have prepared for this. It is a reflection of poor management skills. While my heart bleeds out for the displaced employees, I think we need to see the outsourcing of PAL from the passenger's perspective.

First, I know that the revenues of PAL have been declining over the last year. The question is - WHY? Was it because of the large work force? Or are the top honchos getting more of the pie than what PAL was actually making? PAL management was copying the Cebu Pacific model where most of the ground staff and call center areas are outsourced. Fine. But PAL is not Cebu Pacific.

The airfare tickets of PAL, whether on economy or business class are far more expensive than the tickets on other airlines in the region OR in the world. I speak from experience. When my family and I had our annual Christmas vacation in HongKong 2 years ago, we took Cathay Pacific. The economy class ticket was cheaper by $40 per head on CX than on PAL. Last year, when we had our Christmas/New Year break in Singapore, we took Singapore Airlines. The economy class ticket was cheaper by $35 per head on SQ than on PAL. And these were all online rates and bookings! Flying to the US, the fares on PAL are also more expensive on business class than what Delta or Korean Air had to offer. And the flight carriers of other airlines are by far much better in terms of class of service, amenities, food and comfort than PAL. So why the hell would I want to fly PAL? If there's another airline that would take me from point A to point B offering a cheaper fare and YET better service, I'd just take the other airline.

Second, PAL and Cebu Pacific are not co-equal. In short, it's like comparing apples and oranges. You get what you pay for. CebuPac is a no frills airline. You know that it's an all economy budget plane. You know that meals on board should be bought and are not free. You know that extra baggages are paid for. What you see is what you get. That's why it can offer a lower airfare than PAL. But PAL has a business class that is 3x more expensive than the regular fare! And it's regular economy fare is more expensive than CebuPac. Why scrimp on the customer then? You cannot charge something more expensive for the same quality of service as a budget airline. After all, PAL has Air Philippines, it's budget airline that supposedly competes with CebuPac. In short, if I wanted to fly on a plane that would offer a no frills flight at the no frills fare, why would I want to pay more for it? Then everyone would just settle and fly CebuPac.

Finally, the possible solution to the financial woes of PAL are most probably internal. They need to hire more intelligent people to run the business. If PAL is losing out on its domestic flights to CebuPac, then PAL should shut down all its domestic flights and simply convert half the PAL carriers to AirPhil. Offer all domestic flights as a no frills flight. End of story. If PAL is losing out on its international flights, it should probably review why its airfares are far more expensive than other airlines. Of course, many of the foreign airlines are subsidized by their governments. Because PAL is privatized, there will be no government subsidy. But even on a simple frequent flyer level, PAL offers the worst kind of redemption because it has no other global alliance. So you're really stuck with a raw deal. Even HSBC has pulled out of an exclusive PAL mileage program because Lucio Tan's Allied Bank offer a better exchange for peso spend on ABs credit card. A program like this - where only Lucio Tan will profit - will eventually fail and fall flat on its face. In order to prop up the sales of PAL and lower its airfare, it should sit down with the Department of Tourism and other government agencies in helping PAL be the face of Philippine Tourism. And someone has to give in (especially Lucio Tan). Otherwise, its doom is inevitable.

Being in transition is a lame excuse for inefficiency and poor management. It doesn't placate a lousy customer service. PAL has had its financial woes for the longest period of time. It has never understood the airline industry.

It is time the government look deeper and understand further why PAL is turning out to be the Philippines Lousiest Airline. It may be sunset soon for Asia's supposedly sunniest airline.
Posted by Kid at heart at 11:54 AM