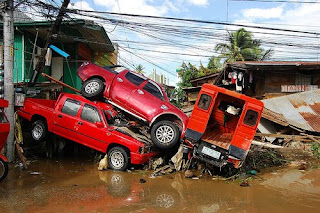 It was quiet in Manila that Saturday night. The rains just poured. In the southern part of the Philippines though, Tropical Depression Sendong was making landfall in Mindanao. This region of the Philippines rarely has typhoons or storms pass through it. But Mother Nature had other plans. It wasn't even a typhoon. It was just a storm. The rains poured all night. It caught the people in the area unprepared with the flash floods.

The morning after was as gloomy as the weather. Houses were washed away. Cars were thrown on rooftops. The water from the mountains had come raging into the cities. And by the time nature stood back to watch its wrath - bodies were coming in from the river basins. Now the death toll is over 1000 and still counting.

While many of Christiandom celebrate the coming of Christmas, one cannot help but empathize with the plight of the people ravaged by Sendong. The easiest answer to this is to blame Mother Nature or Global Warming. But one can never fathom the inexplicable reason answers to the question "why us"?

The pictures posted on the internet were too gory to even look at. When I caught sight of some of them, I could not hold back my tears. It was too painful, even for those with a hardened heart. With rescuers sifting through the decomposing bodies, people holding on to lifeless loved ones, and the total death toll passing over 1000 with hundreds still missing, one cannot help but look for someone to blame. 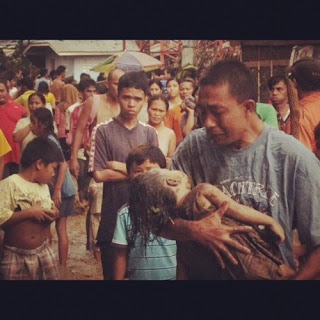 Whether you're Muslim or Christian, there is no god to blame in this equation. Whatever we have in this world, is so to speak - God-given. And while government will be quick to claim that natural calamity is unpredictable, let's face the fact that both local and national government authorities have actually been responsible for the devastations we experience from one calamity after another. In spite of the multitude of natural calamities that come our way year in and year out, we are NEVER EVER prepared for a disaster. Local government officials make money from government projects that are allocated for the improvement of the community. They undercut the budget so that one peso in one pocket is ten pesos in theirs. National government officials are either too dumb to see that or in connivance with their counterpart thieves in the local government. They tolerate, if not encourage, the crooked political machineries that churn their way using public funds for personal gains. They build their palatial homes in areas where not even high water or strong winds will blow their houses down. At the end of the day, it is we who bury our dead and they who celebrate with our money.

With all the pompous bravado of the Bureau of Internal Revenue running after businessmen and professionals, it becomes understandable why it is difficult for people to pay correct taxes knowing that those who pay their dues correctly actually don't reap the benefits of a legitimate collection. Had the taxes been put to good use, there should be no reason why natural calamities become our nemesis. And when Mother Nature reels its ugly head, we need to dig deeper into our pockets in order to help a community devastated from natural disaster that was caused by the local and national government officials who had no sense of foresight on improving their community so that disasters like these do not ever happen again.

But the Filipinos are a forgetful race. We have short-term memory losses. We forget the evils of a dictatorial government and elect their offsprings into office. We forget the evils of a cheater and back her up because she has been good to Bishops and Generals. We forget the evils of murderers that run in family clans all for the sake of greed. We easily forget because as a people, we are sad to say, masochists. We like the pain that is inflicted on us. Sadly put, we have no pride in our country and in ourselves. The only way we can run away from all these is to migrate and become OFWs or citizens of other countries - hoping to escape from a painful past and never to ever look back again.

Year in and year out, a natural calamity occurs - reminding us on how vulnerable we are. But our leaders never learn. Our people never learn. When the shanties are washed away by floods and they bury their dead, the shanties are rebuilt in the same exact place where peoples lives and limbs are at risk. And the local government looks away because these people living in the "esteros" are their voting population. Government officials will never attempt to find a place to relocate them. Trees in mountains in our provinces are denuded because of illegal businesses. Even pristine beaches are bastardized in the name of big business. And when one natural calamity comes, we watch and weep. Never mind the countless lives in the name of graft and corruption.

I am disheartened and angry at the scenario year in and year out on lives and properties lost senselessly because of greedy and corrupt government officials.

What will it take to awaken our senses? How intense a calamity will it take before the Filipinos learns its lessons from nature's wrath?
Posted by Kid at heart at 9:52 AM