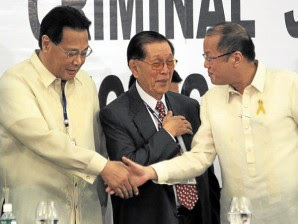 I campaigned for you and voted for you, believing that your principles on good governance and honesty - much like that of your parents - would finally bring the Filipinos out of the throngs of graft and corruption.

And while I stood back and watched as you honed your governing skills, I disagreed in silence with some of the decisions you had made. Of course, like all presidents, you are entitled to decide on your own with what you thought was right, or wrong.

Last night, I watched you speak before the Criminal Justice Summit and was "shocked" at the way you lambasted Supreme Court Justice Renato Corona. While I understand your misery and frustration at the way the Supreme Court had made its decisions over many of the points you mentioned, I found the speech maligning not only the very person whom you referred to but the judicial system of which the SC Justice represented. It was not very statesman-like of you and I apologize if I will have to say that I am disappointed with it. It was not the proper forum and neither was it the proper time to have castigated the decisions made by the supreme court justices. They are, after all, an independent body from the executive department. The least you could have left them was their dignity.

Frustrations are part of the work that you undertook. Even at our work, nothing comes on a silver platter. We end up frustrated because of disagreements even among managers and the administration. And even when we don't get what we want, there are ways of working around an impasse. This, my dear president, is the test of a true leader. He needs to go beyond the partisan feelings and his own agenda. He works around the barrier in order to achieve his goal. During your swearing into office, you had already created animosity between the judiciary and the executive branch, by NOT recognizing SC Justice Corona. Instead of offering the olive branch and making him migrate to the administration's side, you had isolated him and the other appointees of GMA. While they may have been appointed by the previous president, the initial reaction on your part was wrong altogether.

Just like a bratty child that didn't get what he wanted, you whined and whined and became obsessed with the past administration. It's like having an autistic patient go over and over and over the same game over and over again. I'm not saying that you forget the evils of GMA. While you wanted her to reckon with her wrongdoings, you should remain focused on the future of the Filipinos as a people and the Philippines as a country. Instead, I saw vindictiveness and when you were delivering your speech, you were seething with anger. It was a reflection of a child who didn't get the toy he wanted! It was like watching the male version of your sister Kris, rant and rave on primetime. You can't take the words you spat out back. Even if you have no intentions of taking it back, what has been said has been said. The hurt and damage has been done. And I have lost respect in someone who thinks that by berating the SC in public was the solution to the problem, he gets mileage or "pogi" points with the masses.

Perhaps the masses in the C, D and E crowd may have applauded your guts. But they are inconsequential. To this crowd, they only engage in telenovelas, violence, and pornography. These sum up their everyday lives. Too much drama and comedy and lacking in good manners and right conduct. And you acted just like them!

In your words, this is nothing personal as well. If you feel slighted by this letter, then you should think again how it feels to be in the other shoe.

All I can say is that you were unbelievably bratty in your speech! It was unbecoming of a president, a gentleman, a statesman, a politician and yes, even of an ordinary Filipino. As you say, we are all your boss. And my reaction is - as your boss I'd fire you for the tantrums you threw yesterday.

To those that applauded - unbelievable! So many nincompoops in the stable!

[Photo from the Philippine Daily Inquirer]
Posted by Kid at heart at 6:51 PM