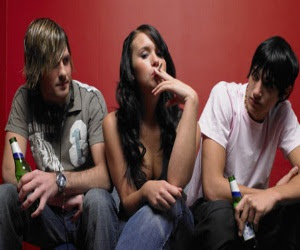 The news of the four teenagers dying in a horrific car crash at 4AM inside the posh Ayala Alabang Village was shocking. They were just two blocks away from home.

Three were declared dead on arrival at the nearby Asian Hospital and Medical Center. One died a few hours later.

Unlike most news that come out of media, there was little said about this except that it was a tragic one and that they were investigating its cause. Of course, because the families are well-off, the media circus will definitely be a hush hush.

But that's not the purpose of this blog.

The age of technology has changed the lifestyle and outlook of everyone. The youth is the most vulnerable in this scenario. With almost anything and everything at our fingertips, the sins of greed, pride, lust, envy, gluttony, sloth, anger are also not far behind. The music scene is no exception to this as well. MTV and other movie channels readily available on cable are easily accessible to them. The influence of technology changes peoples perception and the most vulnerable ones are at highest risk.

Several studies point to this as a fact. With parents usually busy chasing their own professions and successes, many of our youth are left to fend for themselves without proper guidance.

Even in my practice, I see more teenage pregnancies today than five years ago. The YAFS (Young Adult and Fertility Study) in the Philippines shows that males engage in riskier behavior than females. More than 60% of males have engaged in sex with multiple sexual partners (both men and women) by the age of 15. Females are lower at 25%. Risky behavior includes drug use and drinking. Even if the law mandates that alcoholic beverage is not allowed to be sold to those 18 years old and below, business establishments look the other way. Date rape with illicit drug use or inebriation through alcohol is considered locally a heinous crime. And while I may be taken for a prude on this matter, accountability of a situation is on both parties who are either sober. One cannot say that he/she was intoxicated at the time of the risky behavior that the risk is on the offending party.

The point is that we all need to be accountable for individual actions. Whether we flirt or project to other people we casually meet in a club, bar or social networking site, any risky behavior we engage in will always have consequences. And it is sad that we forget that personal accountability during the most vulnerable period is often overlooked.

We can always blame it on the "age" of growing up, or that it was more "fun" getting engaged in risky behavior, or that "we will never know until we've tried it", but the painful lessons and consequences will leave us scarred for life.

It is time that parents get more responsibly involved in raising their children properly, not in the image of what their neighbors have or don't have, but in the spirit of what a family should be. Friends should look out for the good of other friends and not encourage or bully them into being "cool" or "in" so that children and adolescents become "acceptable" to peers.

I can only blog about this as a reminder to all that maturity and responsibility is part of being taught during the upbringing of our children.

I hope that there is still time for many of us who raise our children or nurture relationships.

I pray that they're not dead before they reach their prime.

It would be tragic to have to bury your children.
Posted by Kid at heart at 6:36 PM