90 seconds on a day before Christmas 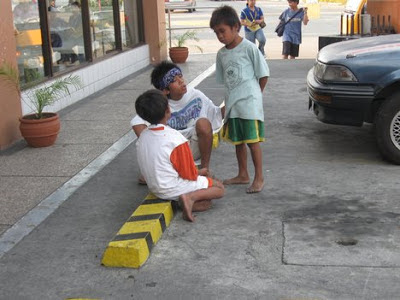 On my way to the gym early this morning, the streets were mostly deserted. The supermarkets at the malls were open early and that's where all the cars were parked. I guess it's a sign that people are busy preparing food for tonight's noche buena, a tradition that millions of Filipinos and billions of people all over the world carry. To the Christian community, it marks the birth of Jesus Christ. To the majority of the people all over the world, Christmas has become one of the most anticipated festive occasions of the year.

As my car stopped on an intersection, I could not help but watch some children without slippers and in ragged clothes huddle in a corner. And while the music in the car churned to the dancing and prancing and rocking of Christmas carols, the young woman carrying a baby outside the window of my car was begging for food.

The 90 seconds wait hit a lump on my throat. Here were children who did not deserve to be on the streets the day before Christmas or any other day in their lives. They were peering into cars that did not even bear plate numbers (read - spankingly NEW!). And no one even opened the window for them.

On the other side of the street were people bringing loads of supermarket items and plates of food, I surmised in preparation for tonight's gathering and merry making. It was like a film in slow motion where I slowly picked up my bag for some change while watching the counter of the traffic light tick slowly away. I pushed down the window switch and a whole flock of children had leaned against the car. The coins were enough for them.

When I got home I could not rub the picture off my mind. The 90 seconds kept rewinding on my mind while I had lunch. I, and let me say it cynically, most of us, have more than what we expect from a good life. Sure, we've had good and bad days. Sure, we've had our share of heartaches and headaches. But we should consider ourselves luckier than most. And the largesse that we have should not be shared solely among those who already have more in life but to the very least.

A few more hours and it would be Christmas. I took out my checkbook and wrote an amount for a preschool child to go to school. I gave it to our parish church. It would make a difference in his or her life. I went back home and looked at how much food there was on the kitchen table. They were gifts from several people. I asked the household help to divide all these cookies and pastries and fruits and candies and whatever there was into several packages. When I get the food I ordered for tonight's dinner, I will pass on some gifts to those who are on the streets on Christmas eve.

If we all put out a little from what gifts we earned the whole year round, it really would be a better place for all. It's my grown up Christmas wish list.