Seniang and our Amazing Race to Paradise 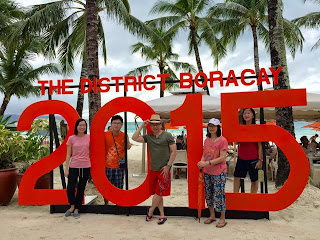 As early as April 2014, I had already booked our New Year holiday for the close of 2014. Our destination - BORACAY!!

It's been over a decade since the kids (who are now all grown up), my sister and mom have been back to the island. The anticipation over this vacation was made stressful by our head on collision with mother nature - Typhoon Seniang - who decided to douse rain over the fireworks of the Filipinos in welcoming the New Year.

With a 77 year old senior citizen in tow, I really didn't expect an Amazing Race escapade.

Our flight out of Manila to Caticlan on December 30, 2014 was scheduled at 9AM. Typhoon Seniang was already bearing down her fury in the Visayas that day. When we arrived at the airport at 730AM, our nail-biting journey had begun. At 9AM we were at the boarding area. The two earlier flights to Caticlan had left Manila. That was good news. Our flight was up next. There was no announcement at 9AM...then 930AM...then at 10AM they announced that there was a delay in our flight because of the weather disturbance. Patience became a test of strength. My mom was finishing the second round of her rosary. At 1045AM, the announcement came that boarding for Caticlan was in progress. FINALLY!!!

The plane had departed Manila at 1135AM. At around 1210PM we were about 5 miles from the Caticlan airport...and the pilot announced that we were going for another spin as the airport was not visible. My mom was on her fourth round of her rosary. As the pilot made another attempt to land, he announced that the rain in the island was making the landing a challenge...so we were going another round...then you could hear the flaps roar, the wheels come down and the pilot announcing to all that we were making a landing attempt. The landing went smooth but with the wet strip, the plane came to a halt almost at the tip of the strip.

And it was rainy and windy. I found out later that we were the last flight out of Manila into Caticlan.

On arrival in Caticlan, Vance from THE DISTRICT BORACAY (www.thedistrictboracay.com), had umbrellas in tow and the van was ready! 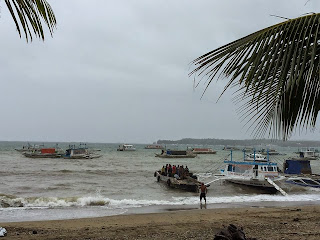 The second challenge was moving from the port to the next port - via a motorized banca. The water looked angry and choppy. All speed boats were cancelled. After an hour of waiting at the port, the banca was ready and we took the 15 minutes see-saw nauseating trip from Caticlan to Boracay. If there is one thing I can say about Vance is his "never say die" attitude. Amusingly - our family was like one troop of Kamikaze warriors off to battle, including my 77 year old mother who didn't let up in spite of the raging typhoon.

The DISTRICT BORACAY was a great find in the heart of Boracay. It is a boutique hotel right in the middle of Station 2. From the beach, you will find D'Mall a few steps to the right and more restaurants (Starbucks, Army Navy, Pamana Restaurant...and more) to your left. The hotel is beautiful. The rooms are large. The linen and amenities are first class and clearly well thought of by the hotel. They don't scrimp on luxury. What's more, they don't scrimp on service! If there's one thing that stuck clearly on my mind was the outstanding, five star service this hotel brings. There are no words to describe the great Filipino hospitality that shone through in every personnel in the hotel. From the driver of the van to the front desk crew to the security guards on the beach...everyone made the difference between staying in a hotel or staying in heaven. 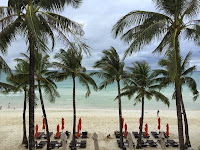 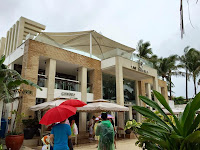 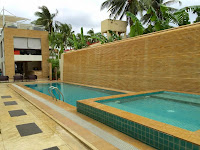 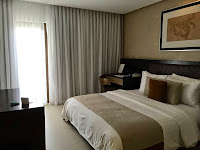 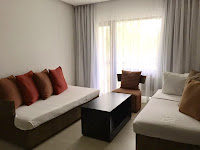 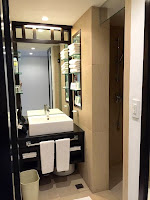 The breakfast buffet in the hotel was superb (one of the best I've had) and if you woke up kinda late after a late night out or just felt too lazy to get out of the uber comfy beds of The District, you could march into the Star Caruso Lounge and have brunch up to 1230pm for just a little top up.

My full review of the District is on Trip Advisor.

The four days, three nights New Year vacation was made more memorable not only by Typhoon Seniang who drenched the island with rain on New Year's Eve but rather, the count down fireworks show on the black shores of Boracay during New Year's Eve was by far the best firework performance I have seen so far.

What was there to do in Boracay for four days and three nights? 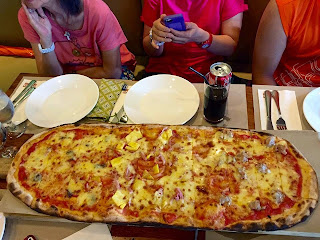 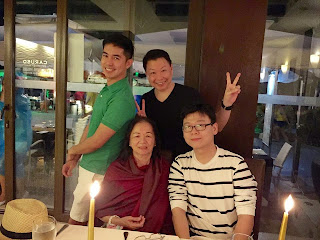 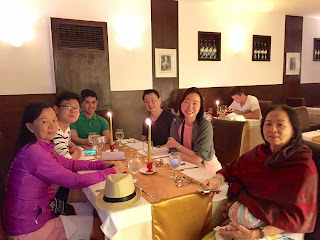 The storm had passed on the day we left, but the kinks stayed behind. On our way back to Manila, our 330PM flight was delayed. We were then offered by Philippine Airlines P3,000 EACH, if we gave up our Caticlan seats in exchange for a flight out of Aklan at 7PM. A tempting offer but we passed on it. All the remaining afternoon flights were then cancelled. EXCEPT for the 330PM flight!! Which was delayed. And when the plane arrived at 5PM, we were hurriedly boarded into the plane in order to catch up with the sunset curfew. (Because there are no lights on the runway of Caticlan, there are no evening flights. The last flight is when the sun sets.)

It was a vacation that would be remembered forever.

Who said that only the Pope would be racing with the storm? With my 77 year old mom in tow, it can truly be said that every vacation - IS TRULY MORE FUN IN THE PHILIPPINES!