This was an early morning headline. Some idiot working in the government had an epiphany. I guess their administrator Hans Cacdac needed a pathetic excuse for the government employees at the POEA (Philippine Overseas Employment Administration) to be on Facebook 24/7. The agency is reported to "require the use of Facebook to establish a communication platform for domestic workers, recruitment agencies and the government." In addition, it "has also required all recruitment agencies to have their Facebook accounts and share these with domestic workers they deployed."

As the news reports it verbatim:

“The account can also be used to prevent dispute between household service workers and their employers, or the worker can endorse their complaint to the POEA and recruitment agencies through the FB account,” POEA chief Hans Cacdac said.

“The creation and maintenance of Facebook account will also be required for the processing of the household service workers and the POEA will also monitor the agencies’ compliance through their account,” he added.

I'm not really sure of this idea - but I believe it takes two to tango. If I were the employer, I would definitely ban the household help from accessing any FB account during work hours. And while they are free to go around posting on FB their musings for the day, I expect them to work when they need to. And when they're out of the country, say, working as household help in some more industrialized country, whose internet connection or computer work station will they use? I'm not quite sure if this was well thought of or whether there was any spark of brilliance on the RULE that Cacdac wants implemented.

So here's the question - if I'm the employer and I don't want to abide the rule of POEA in mandating a FB account and access to Filipino workers - what will the Philippine government do about this? Who stands to economically lose from this lame brain idea? Even on the issue of addressing disputes between household service workers and employers, I have my deepest doubts on how the POEA thinks it will even help endorse a complaint to the agency. If such a complaint is filed, will the POEA find field agents to extract them from the employed territory? 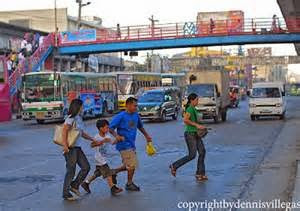 The traffic has been horrible the last few months. With the monstrous road repairs and the MRT trains & rails requiring the long needed maintenance, Metro Manila is really not a happy place to be in.

I have lived in the South of the metropolis for almost four decades. That was when moving from Alabang to UST was just a 35 mins drive! Today, it's a 2 hour crawl if you leave after 630AM to reach the university. And it's not just the cars or public vehicles on the roads. While there's a clamor to improve the public transportation system - we've not addressed properly the question on, HOW DO WE DO THIS? It's obvious that adding more buses isn't the answer. Neither is urban planning. It's too late for Metro Manila unless you want to pummel all the landmark SM malls from North to South to East to West of the metro. Or that adding more railways above ground isn't the way to go. And that we'd probably be all dead before we see hope for any subway service. And those jeeps and tricycles need to really retire. And those vendors who occupy the sidewalks need to disappear. And we need to address the problem of jaywalking as well.

The Philippines has this obsession of building anything ABOVE the ground. That includes the pedestrian crossings called overpass. This is done so that (A) it does not disrupt traffic on the ground and/or (B) so that there is a source of corruption with governmental projects. I firmly believe that it's the latter. It's a useless prop because these overpasses are not well utilized (as they are full of vendors or thieves) and that the Filipino culture is playing "patintero" with oncoming vehicles. 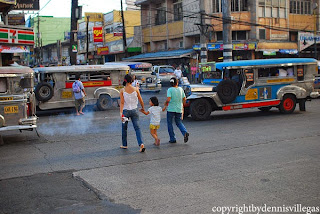 If a law was passed that it would REWARD anyone who runs over a jaywalking pedestrian, I don't think we'd get idiots crossing the streets.

The other day, I was crossing a pedestrian lane somewhere in Makati and there were jaywalkers who were running across the street a stone's throw from where I was standing. There was a MAPSA officer in front of us. He was busy texting on his mobile phone. After a few minutes observing him, he was chasing a car with a number-coded plate number. He just turned a blind eye to jaywalkers.

It's not only in Makati though. I have yet to see Traffic Czar and MMDA honcho Francis Tolentino instill this policy along C5 and the whole of EDSA where the commuters make a dash for it across the streets for the finish line. And these pedestrians make a mockery of the law and we just sit back and watch until some idiot gets into a fatal accident! 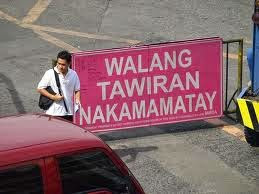 With all that's been going on among our lawmakers and people employed in government, there needs to be a stricter implementation by the Civil Service Commission on the requirements of individuals to hold public office. They all need an IQ test. At the rate some of these government officials are going, it looks like an IQ of <60 has become a mandatory requirement to be fit for a government position.

Towards the last quarter of last year, Party list congressman and former mayor of Manila Lito (two-face) Atienza was one of the proponents asking congress to pass a bill exempting boxing king and forever absent Pacquiao from having to pay taxes for his winnings (and losings) to the BIR. I get it - Pacman has a sob story and is a rags to riches inspiration. So do other athletes and professionals who try to make a decent living and yet PAY the government the tax due them.

Let's call a spade a spade. If Pacquiao really had the documents to show regarding his payment of taxes in the United States, I don't think the local authorities would still be running after him. He has a whole battery of lawyers and people whom he can pay to do the paper works. It's just not there. End of story.

Now what the fuck are the idiots in congress and now joined in the Senate by another idiot proposing?

Effing stupid! I don't know what flashed through the night when Koko Pimentel suddenly thought of having this kind of resolution even passed. I tell myself that it may have been an orgasm that had gone bad? But it's outright double jeopardy to the Filipino people because (1) EVERYONE pays the taxes due them (otherwise change the goddamn Taxation Law first), and (2) CONGRESSMAN Manny Pacquiao has stolen from the coffers of the Filipino people because he has been absent from Day 1!!! I don't even know why these absent politicians don't get booted out of office!

Then there's the wedding of the year...or so they say...

The tongues in the social circles were wagging that Chiz and Heart were "pissed" that the wedding of the year should have been originally held on the 14th of February and not on the 15th as the actual date. Well, a chinese couple had already reserved Balesin on the 14th so the fairy tale wedding had to take place the next day.

But Chiz and Heart are no Dingdong or Yanyan. If we were to believe his SALN, Chiz is the second poorest senator at a little over P8M ($177,777) for his assets, liabilities and net worth (with only P3M cash on hand). In short, he's not the kind that could afford a 2 carat diamond ring, a Monique Lhuillier gown for his bride, a wedding in the members only Balesin Island, and a second reception for friends of the bride and groom at the Blue Leaf to over 1,000 guests!!!

Of course, while he's part of the circle of PNoys friends, he probably won't get investigated by Kimmy but there's a legitimate question that's requiring not only an investigation but an answer as well - HOW CAN THE 2ND POOREST SENATOR PULL OFF A WEDDING THAT IS BEYOND HIS SALN?