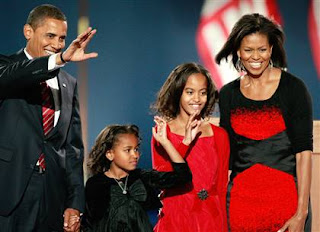 “If there is anyone out there who doubts that America is a place where anything is possible, who still wonders if the dream of our founders is alive in our time, who still questions the power of our democracy, tonight is your answer,” Obama declared when he became the first black African-American to make history as the 44th elected president of the United States of American.

This shows the world that anybody can fulfill the dream of becoming King of the World, the most powerful man in the universe, or whatever name you want to call it.

I will not blog about how President Barack Obama did in his campaign nor how Senator John McCain and Gov. Sarah Palin literally were signed off in this one-sided battle for the Road to the White House...that is history.

It's about celebrating! It is electrifying that Barack Obama, who symbolized every common man's dream, stood above all adversities, to become president of the United States!

Clearly, change is in the air...the future is ours to hold...and only we can become victorious in the midst of change when we do something positive to make things happen the way we want.

Wishful thinking ... will the Philippines ever be like this? Dream on....
Posted by Kid at heart at 3:25 PM