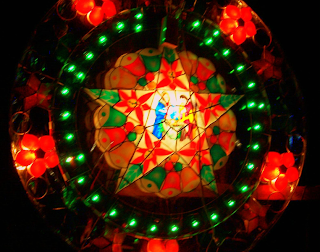 It's the last week of November and I still can't feel the spirit of the yuletide season kicking in.

Every year for the past decade, our house staff would be eager in putting up the Christmas decors right after All Soul's day. The furnitures would be rearranged, the tree would be dusted and ornaments would be cleaned. The traditional parol would be taken out of the box. I would try to find out what the holiday colors would be for this year so that new adornments to the holiday motiff would match.

For some odd reason, however, that feeling has not sunk in.

While the holiday "spirit" in all the malls in Manila officially started October 1 (with the Filipino penchant for the longest yuletide celebration in the world...as long as the month started with the suffix "-ber" the Christmas holidays have begun) and the official countdown on Philippine media begins on October 1, 2008, there just seems to be something missing this year.

I don't know if it has anything to do with all the corruption scandals the Philippine government is warped in or the fact that Mikey Arroyo, Ate Glue's son is initiating a charter change while his mother is still hot in her seat, or that the world economy seems to be deteriorating and that business in the Philippines has not been that upbeat (but it seems that we're doing much better than the US and European countries), or that the Philippine peso has deteriorated by almost 20% from a closing high last year where USD$1 = P41.50, it has dipped to P50 today, or that I just recently retired from the academe and am trying to find myself back on track with my life as a retired academician.

While there are several bazaars and tiangges left and right and jingling and jangling of carols and bells are ringin, they have not brought enough emoting to my tired spirit and has made me wonder - what ever happened to the Christmas spirit?

I instinctively went to Designer Blooms yesterday to have a floral arrangement for the house. First time I'm having the interior of the house decorated by a flower shop. It was my way of jump-starting the holiday spirit in me.