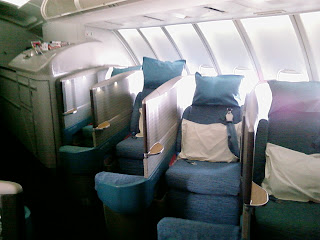 I had a business meeting in Bali, Indonesia from April 14-16. My first time to visit this noted tourist spot in Indonesia.

Understandably, there would be limited or no flights to Denpasar from Manila. In the first place, the Philippines is a haven for beaches as well, so there would be no need for the Filipinos to fly there for some sun and fun or for conferences for that matter. Secondly, Manila is NOT a major hub in the Asian region. The flights to and from Manila are predominantly for the OFWs who comprise a majority of the frequent flyers to this side of the continent. You can palpably feel this at the airport where majority of those on the flight are off to their final destination of work. It's a pity because on the flight from HongKong to Denpasar, the plane was full! Full of foreigners who made Denpasar their final destination for fun, relaxation or business!

There were three flight options from Manila.

My team and I took Cathay Pacific. It had the shortest waiting time, but it meant that we would have to fly North then fly down South again, passing the Philippines once more.

On board Cathay Pacific's newly configured plane, the business class section is reviewed in this blog.

And now the negative factors: the individual seats were slanted about 30-45 degrees, which was troublesome because I was disoriented during take-off and landing. Of course, when it was time to touch down, I wanted to look out the window but it was difficult to contort my body. The windows were at my back and the seat was blocking the view to all the windows.

All in all said, the flight was a smooth one, to and from Manila.

I'll blog about Bali in Part 2 of this review.
Posted by Kid at heart at 6:15 PM

Hi Dr. Co!:) just droppin a comment. Bali's top asset is its corteous people...pleasant, accomodating, outgoing BUT the beach??? na-ah...we're up several notches! Be proud of Boracay, Bolinao, Palawan etc. Bali's like a cheaper version of waikiki, crowded yet safe, teeming with stores and fancy hotels ("our beaches are far better than theirs but why are we so left out???sigh...tsktsktsk...). Waves in bali are wild at night and you should really seek first the suggestions of the locals on where to go and what to eat. Romantic sunset dinner at Jimbaran beach was the highlight of our visit. At Jimabaran, food: dampa style (paluto), setting/ambiance: much like bora (tables/chairs right on the shore facing the sunset), people: awesome! Hmmm...so its not actually the place...it's the people that makes it a famous getaway...:)