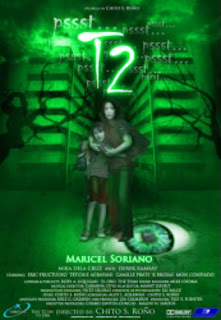 I am not a fan of Pinoy films.

Once in a while though, it's worth a review.

The horror movie is about one of the Filipino mythologies called "encantos" (enchanted) and the intertwined lives of the Claire (Maricel Soriano) and Jeremy (played by Derek Ramsay) and Angeli (Mika de la Cruz). Angeli happens to be the offspring of a human (John Lloyd Cruz) and an enchanted (Carmen Soo, who play cameo roles).

When Claire brings Angeli to Manila to live with Angeli's "aunt" after the death of her father, strange things happen along the way to the Tenement Building. The suspense builds up when they reach the tenement and await the "coming" of those who would take Angeli.

While the horror flick does send some goosebumps to the viewer, some of the scenes were interspersed with comedic folly which should have been left to the chopping board during the editing sequence. The first 30 minutes of the movie could have been edited to a 5 minute relevant footage as well. Finally, one cannot help but acknowledge the other star in the movie - the inevitable Nokia Cellphone and their ringing tones!!!! Nakamput...It was annoying and pesky and had me wishing I had put my mobile phone in loud mode as well. The constant ringing and tone reminders of the mobile phones in the movie stole the thunder from under the other stars - Eric Fructuoso and Tetchie Agbayani.

Enough said. Showing now in local cinemas, between Friday the 13th and T2, the latter is a much better movie with a predictably Pinoy ending!