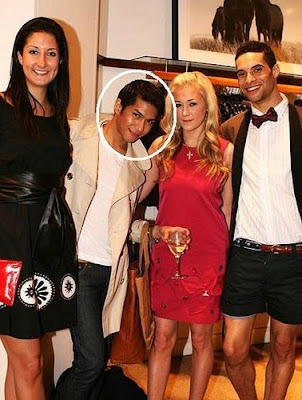 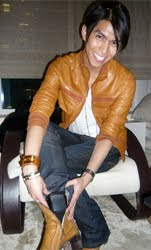 His name is Timothy Mark Depakakibo Garcia. He is the 25 year old son of former Maj. General Carlos Garcia, the erstwhile former military comptroller of the Philippines who has been accused of plunder charges to the tune of 300M pesos (together with his wife Clarita and sons Ian Carl, Juan Paolo and Timothy Mark).

Who is Timothy Mark Depakakibo Garcia? Last September 16, 2009, out of nowhere, Peter Davis wrote a feature article on Tim Garcia in the news website "The Daily Beast" on the young Tim who is now a publicist for fashion label Marc by Marc Jacobs. In the article, Tim is seen living out his house arrest fashionista style. He is supposedly kept company by a friend named Bryanboy (whatever that means). The family is wanted in the Philippines for a string of plunder cases, what with the father supposedly making headlines years ago from acquiring multimillion dollar cash from his measly pay as an army official. In January 2004 (or when Tim was only 19), he and his mother purchased a $765,000 condominium unit (Unit 6A) at the Trump Park Avenue Condominium right smack in the heart of Park Avenue, New York City.

Interestingly for those that failed to follow the trail after the expose on the illegal wealth of the general, this is the trail as reported:

On March 5, 2005, Timothy Garcia was "arrested by ICE (Immigration and Customs Enforcement) agents and presented in this District."

The court was also informed that Clarita Garcia was arrested and presented in the Eastern District Court of Michigan in Detroit and Ian Carl and Juan Paulo Garcia were arrested in the Northern District of California. All four are currently detained.

Clarita Garcia, 58, and her husband, retired Major General Carlos F. Garcia, and their three children – Timothy Mark, 25, Ian Karl, 30, and Juan Paulo, 27, are all facing plunder charges in the Philippines. Plunder carries a penalty of 30 years to life in prison.

General Garcia, a former comptroller of the Armed Forces of the Philippines, and others were accused of “willfully, unlawfully, and criminally amass, accumulate, and acquire ill-gotten wealth in the form of funds, landholdings, and other real and personal properties in the aggregate amount of not less than 303-million pesos (US$6.2 million)."

The source of funds used by Timothy and his mother, Clarita, was believed to be the unexplained 303-million (US$6.2-M) acquired by General Garcia. The Garcias were able to transfer $2 million from the Philippines to the United States.

Except for General Garcia, the rest of the members of the family are all US citizens and are subjects to extradition.

In addition to extradition, Juan Paulo and Ian Karl are detained in the Northern District of California in San Francisco for bulk smuggling charges related to $100,000 being transported to the United States from the Philippines in 2003.

Timothy Mark and Clarita Garcia are only facing extradition charges and have no other criminal charges.

Before purchasing the Trump condominium unit, Clarita Garcia deposited on Jan. 15, 2004 $308,327, approximately $200,000 in cash and in two certified checks from the Bank of the Philippine Islands totaling $108,327 into the Citibank account in New York she holds jointly with Timothy Garcia.


We probably would not know what was going on in the mind of Mr. Davis when he came out with the "fashionista" lifestyle of Tim but this definitely was not a venue to brag and brandish the lifestyle of the crooked and famous. One of the readers had commented that unless proven guilty, no one had the right to lambast the Garcias. Come on, give us a break. Not all are morons in this country, where money laundering and corruption in government is the RULE, rather than the exception.

A fashion statement? Duh, yeah right. But highlighting the "fashionista approach" with Garcia "perched on a sleek white Armani Casa chair in his apartment in the modern, gilded Trump Plaza at 502 Park Avenue, Garcia is decked in head-to-toe designer: a supple caramel leather Alessandro dell’Acqua jacket, Alexander McQueen jeans, a thin white LnA tee shirt and YSL boots. His wrists are adorned with a big Cartier gold and silver Tank watch, a Cartier Love bracelet, a white enamel Hermes bangle and a $1000 dollar large gold plated spiked Hermes cuff called the Collier de Chien." is a crime on the the Filipino people by displaying ostentatious living from apparently "stolen" wealth. This apparently obnoxious display of travesty of the Philippine justice system can hardly be downplayed and must affect the senses of even the most callous and the most snobbish among the faux elitist fashion circles.

As if the rise to the Imeldific or the Arroyo banquet were lifestyles that would catch the ire of the citizens of the world, Tim is not some important personality that is provided the God given right to go ahead and spend the money of the impoverished country where his father happens to have been the former comptroller and happens to have plundered from. And I have no idea who and what Marc by Marc Jacobs is. Marc may be some fashion icon in the hubris of New York whose eclectic crowd of wannabes may be going gaga over his world, but he definitely needs some constant reminder that the rest of the world does not revolve around him and that a little sensibility on social responsibility among these fashionistas should slap some sense into their ever snobbish attitude of never care.

I praise the Filipino for being able to rise above the proverbial poverty level and make it big in, yes, New York New York, there has got to be some reality check among the youth on how to grab the limelight with a conscience. The likes of Manny Pacquiao, Aling Dionisia, Boy Abunda, Lea Salonga or other Pinoys who have shown that their lifestyles have changed because of hard work are the epitome of the kind of people that those of us who struggle to make it big in this crazy world should emulate.


I loathe, however, those who have no right to spend other people's money for their own gains.


We do not need to publicize people like Tim Who, who seems oblivious of the limitations of what his family financially is capable of and utilize the Filipinos money to pamper his sordid taste in fashion with the approval of "fashionista" cohorts in New York City. It's people like these who justify the glamor and glitz of an empty lifestyle. No morals. No values. A designer's name attached to their wrist, their backpacks, or their ankles.

But Tim Who is no Paris Hilton and like the other thieves of the night, he has no right displaying unabashedly the gold that he has no right to wear. It is a shame that people like Davis even make a sense out of nonsense.
Posted by Kid at heart at 8:26 AM

Salamat for publishing the Garcia's corrupt practices. Are the Garcias mentioned herein news reel related to the Garcias of Cebu City, one of whom is the Governor?

Salamat for publishing the Garcia's corrupt practices. Are the Garcias mentioned herein this news reel related to the Garcias of Cebu City, one of whom is the Governor?