The beauty and the bitch 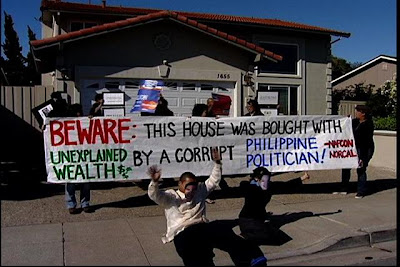 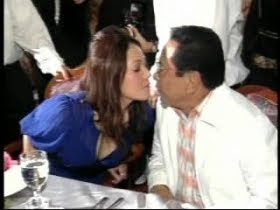 As the Pinoys would have it, September has begun. And of course, as campy as it may sound, the Pinoys always relate the -ber months to Christmas. It's the only joy they have. What more can you ask for? In the Philippines, the longest holiday is in December. Nothing gets accomplished well in this country because of the countless holidays we have. And we have the dwarf in the palace to blame for the "economic holidays".

But the month didn't start off on the wrong foot. As a matter of fact, Sen. Mar Roxas, alias Boy Padyak, began the month by announcing his withdrawal from the 2010 presidential elections to give way to Sen. Noynoy Aquino. It took Malacanan by surprise. The following day, the other dwarves in the palace started twitting the move of the Liberal Party. They began undermining the capabilities and even mocked Noynoy who went into retreat to contemplate on the issue at hand. Spokesperson Anthony Golez was eager in the attack on the topic. Can Malacanan please shut the F++K UP?!?!!? Nobody wanted their opinion. Golez should just suck his balls dry if he has nothing better to say.

That, Mr. Golez, is drawing attention away from the children of the dwarf in the palace who are being accused of malversation of public funds by not declaring the actually wealth in the statements of assets and liabilities. The twin thieves have declared that if anyone has proof to just go ahead and sue them. Okay, so much for decency in this government. Let's stick to the facts. With the salary of a government official, where can the dwarf's kids get the money to buy million dollar houses in San Francisco? And in the Bay Area ha? Sige nga Golez, ipaliwanag mo ito ng di kumukurap! Mga ganid!


Then the following week the dwarf in the palace decides that we declare the day of Ka Erdy's burial a non-working holiday?!?!!?!? Dang her economic holidays. Did not see any relevance at all. And this month alone, the last day of the Ramadan on September 21 has been declared a national holiday - AGAIN! Ang saya saya noh!!!!!!!!!! So many holidays in this country. Why don't we just create a day where the dwarf farts and there's no work automatically? I don't just get it. If there is a declaration of holidays to show "equality" among the minority sectors then we should declare a day of "Gay and Lesbian Day" as well, di vahhhhhhhhhhhhhh?


Then the story of Rachel Tiongson pops up in the news. ABS-CBN snatched up the video where she proclaims that she has been beaten up by Chavit Singson, her husband (or live-in partner for 17 years). Dang again! The GABRIELA group is up in arms that this is no way to treat women. Yeah right! If a woman get's beaten up, it's called abuse. If a woman treats the man like a dog, it's called "Under the Saya". Ano ba yan?!?!!?


So here's the take, Che was married to Chavit at 18 years old. They have 5 kids. The eldest is 16. I hate to be judgmental but let's face it. It's got to be about the money. They have 4 children. Chavit has caught her with the other guy several in the past and has sent her away. She has always come back begging for forgiveness. And for the kids sake (daw!). She says that Chavit womanizes that is why she cannot take it anymore. So does it justify her looking for another man? I don't think so. If she thinks that the children are caught in this crossfire she needs to be more mature to consider the fact that she should not get F++K+D just to make things equal. Ang tawag diyan - LIBOG! Her lover happens to be just a few years older than their eldest child. Talaga naman!!! She has come out open in the media because she is afraid of what will happen to her after she saw that the bodyguards of Chavit had stripped the guy, and beat him up in front of her. News is that he was castrated in front of her and she just ran and ran and screamed after seeing the jewels of her lover removed. Anyway, that's the unpublished news because the lover is a TV matinee idol. But going back to the point, her media blitz was actually to save her life. She is afraid that Chavit will end up killing her.

How's that for a week in the news in the Philippines? Ang saya saya talaga dito!!! Andito ang impiyerno at ang langit! In the words of Imeldific, what you just saw in a glimpse was the True, the Good and the Beautiful. Leche talaga ang mundo!

as usual, you just have made your point well - and i ended up speechless!