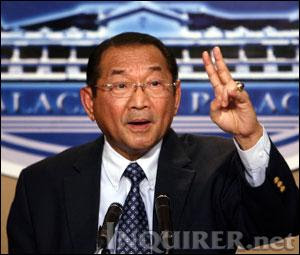 If there's anyone to blame in the guts and glory fight of Ate Glue on becoming the next Congresswoman of Lubao, it's the man behind the presidential figure - the little president called Ed Ermita.

The ex-general has never wavered in his support for Ate Glue. Even in an interview on her proposed plans after 2010, he has blatantly expressed that the priority of Ate Glue is charter change. In the interview, it was quoted that Ermita said that "Let's be realistic - the President is the President...because of her stature, when she gets [elected], definitely she will have a lot of clout on anything in congress...you can be sure that should she be elected, definitely she will have clout among the congressmen."

In fact, if there is anyone here who has the most power in office, it's Ermita. He calls the shots and he is definitely privy to Ate Glue's plans - now and tomorrow.

Who is Ed Ermita? Born in 1935 and hailing from Balayan, Batangas, Executive Secretary Ed Ermita finished his schooling primary and secondary schooling at the Immaculate Concepcion College then went on to pursue his military career at the Philippine Military Academy Class of 1957. His government service included being Vice Chief of Staff of the Armed Forces of the Philippines in 1988, Undersecretary of National Defense from 1988-1992, and Congressman of the 1st District of Batangas from 1992-2001 (a total of 3 terms in office). Then he went into hiatus until the dwarf from the palace beckoned him to the most prestigious position in an appointive office. In 2004, when Ate Glue was elected into office (or reportedly stole the Presidency), the embattled dwarf found an ally in the little president. The executive secretary stood his ground and protected the dwarf from dissent in the dwarf's cabinet.

To this very day, Ermita remains loyal to the dwarf. When asked if the dwarf could be trusted not to position herself as prime minister in the future, Ermita said "We are in a democracy [and] everyone is free to do things that they wish they should do, for as long as they are within the bounds of law. Everyone has to face up to his or her future, and and when they're elected."

Except for the people in the district of Pampanga where the dwarf intends to relocate to, the rest of the Filipino people believe that the actions of the dwarf on clinging on to power is matter of addiction to it. The worst part of it is that the dwarf can utilize her resources while she is in power in order to succeed in winning again. And while it is true that we are free to do things within the bounds of law, the ethical and moral aspect of the dwarf running for a lower position in order to perpetuate power leaves a bad taste in the mouth.

You will have to agree though that there are those who follow because of blind faith. Some say that Ermita is probably as possessed as the dwarf. There's another name for it - fanatic! Hallelujah!!!
Posted by Kid at heart at 9:32 AM