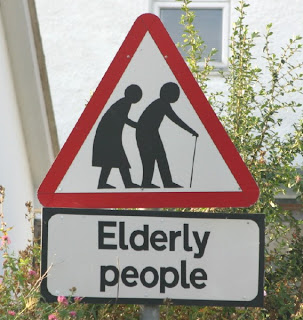 Senior citizens MUST RETIRE at the mandatory retirement age. No one should be allowed to run for public office even if they claim that their minds are still sharp (yeah right!) after age 65 y/o. The risks of senile dementia, chronic debilitating illnesses and other problems with health are highest in this age group. As a matter of fact, it has been shown that it is this age group that requires for more health care than any other segment of the population.

Watch these people during campaign sorties. They look as strong as bulls, being able to go through days and days of campaigning without sleep! They even dance the night away in events before, during and after their political heydays. Then when they are caught in a cross fire with the law and get arrested, you see all their illnesses come out - they are hypertensive, they become suddenly diabetic, they have chest pain, they are markedly depressed - it's like they have the whole health and disease manual thrown at them. And their asshole doctors and lawyers utilize the various textbooks of medicine to make sure that their clients stay in the comfort of the hospitals.

No one can and should stay in public office till the day they die. This is a travesty of the law. I cannot understand why the COMELEC can decide on whom to and whom not to run for public office. For example, Dante Remoto, a professor at the Ateneo de Manila University wants to run for senator. Well, for goodness sake, let him. The reason for banning some people in running for public office - they did not appear to have the capability and resources to wage a national campaign! You can tell that these mindless people in the COMELEC are actually thinking with their brains that are found below their belts. That small in size!

In the same vein, I believe that senior citizens after the age of 65 SHOULD NOT be allowed to vote any longer. Look at how Binay courts the senior citizen population in Makati. So much gift giving and sharing, if I may be sarcastic, about this segment of the population. Besides, I have my doubts if these senior citizens actually vote for the next president or government official because they see the future of the younger generation. I am willing to make a bet that the majority of them will vote for those that are only of self-service to their segment. I asked my mom who is turning 73 next year on what she thought about my "harsh" thoughts and guess what - she agreed with me!

Have you ever seen some of these senior citizens in the airport? During boarding time from Manila, they are all in wheelchairs and therefore enter the airplane FIRST! When the airplane lands in their final destination, like the US, my goodness, they can ambulate already!!! And they fight their way to the door of the plane, even pushing aside the passengers on first and business class. You think they are frail? Think again. These are jujitsu experts so you don't necessarily have to be kind to all the senior citizens. Some are rude and being rude in return is but fair.