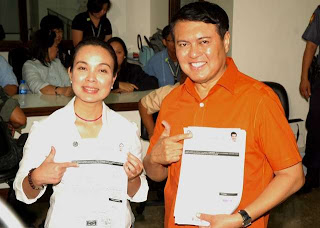 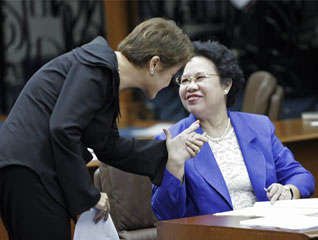 Neurotic, psychotic, schizophrenic, autistic...you name it, we've got it!

Marlene Aguilar-Pollard: "Briton is informant, gunman" - Dang this woman! She is the mother of suspected murderer Jason Ivler and the sister of rockista Freddie Aguilar. She's got this conspiracy theory that Renato Ebarle Jr was killed by her British bodyguard Mark Hauser to frame her son on orders of people who don't like what she's been writing in her "book". Well definitely, she's no Tom Clancy or John Grisham, but wow! Fantastic! With the assault weapons her son's got and the footage on his shootout with the local National Bureau of Investigation, this has got to be one of those fantasmagoric tales that only a cookie would probably conjure. Not that she's unbelievable, but hey, you gotta hand it to her. Her story is one for the books. CIA, conspiracy, who'd believe the mother and son tandem? The media should stop printing her stories. Darn. It's getting to be a headache and puhlizzzzzzzzzzzzzzzz, can we get their family to see a shrink?

Manny Villar: They're playing politics. Okay, so they're dirty. So what? It's the political ballgame dude. You gotta face the music if you wanna be president! The continuing saga of Manny V's efforts to ditch the ethics and misconduct charges are akin to GMA ditching her efforts at accusations of graft and corruption. And he's not even president yet. You gotta hand it to him. He's using all that moolah of his to get people singing the tune of "...si Manny Villar and aahon sa atin sa kahirapan" (Manny V is the one who will lift us from poverty). Sanamagan. You use these mendicants to sing the song and air it on prime time and on the radio, it might just work! I am saddened though that there are respectable personalities that believe this crap! Manny had taken this complaint to the Supreme Court already to file for a temporary restraining order and a permanent injunction to stop the senate committee from continuing its investigation. But time and again, his complaints have been foiled. Now he's using his moolah and fanatics (or should I say his insignificant followers including the once credible Gilbert Remulla) to move his current residence to Malacanang. Face the music first Manny. Unbelievable! The guy is so much like GMA. Deja vu? Jamais vu?

Jamby Madrigal: Doesn't believe in surveys but her own. Even if she's trailing at the bottom 0.2%, she thinks she'll still make it. Her reason? The SWS and Pulse Asia surveys didn't even think she'd make it as Senator in the last election. But she placed 4th among the winners! In your face SWS and Pulse Asia!!! But then again, she's got the Ladlad Party and the other gay groups in the senate and congress and wherever to bring this cookie to the palace. Who knows, she may be right? After all, she's in good company with the rest of them.

And the only place these people should be is actually the nut house! Philippine Politics is pathetic. We're nearing the presidential election and we've got loonies in our midst. Bow!
Posted by Kid at heart at 8:49 PM