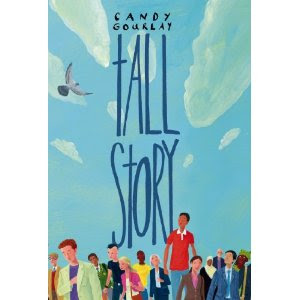 A friend had given me a signed autograph copy of the book "Tall Story" by Candy Gourlay.

I have a few Filipino writers whom I'd give the thumbs up status of "I LIKE". While I do get to read Filipino writings, I am not a happy reviewer as I end up criticizing more of what the books lack and rant about why it even rakes in a sale, rather than appreciating the message (if there is any) about the book.

Last Sunday, in spite of the heavy week ahead and all the "to do" things on my mind, I needed a dose of sanity from all the stress, I started with page one.

It was from Andi's perspective.

Rush hour.
So many armpits, so little deodorant. The whole world is heading to Heathrow to meet long-lost relatives. I am wedged between the tummies of the two fattest men in the world.
Rank.
Mum's practically vibrating. Like she's overdosed on coffee. Which she probably has.
Dad's got his arms around her like a lock. She's fidgeting so hard and the train's so crowded. "It'll be ages yet, Mary Ann," he whispers into her ear.
"I just want to make sure we're there when he comes out."
"He's sixteen He'll be fine!"
Dad kisses her forehead. Which isn't a stretch because the crowd is pushing the so close together his face is practically pasted to her head.
"But William" - Mum glares at his chin - "he's so TALL!"
Why is Mum so psycho about Bernardo being tall? She's been going on about it since we found out he was coming to London. "Don't be surprised now, Andi, your brother is tall. Tall, you hear me?"
Does she think I needed impressing? I mean, Mum isn't exactly God's gift to the human race in the height department. I'm the smallest in Year Eight and I'm still taller than her. She's so short she needs an ID to prove she's old enough to buy wine at the supermarket. "I don't understand," she always argues at the Tesco Express. "Where I come from there's never any problem."
Well, London isn't the Philippines, Mum.
The two tummies are practically holding me up in the carriage, I could fall asleep and remain vertical. Hopefully it won't be this bad on the return trip with Bernardo and his luggage.
Bernardo!
I can't believe I'm minutes away from becoming someone's little sister.


Those lines from the first two pages of the book had me smiling and enthralled in what was going to be a good read.

The short novel was a "feel good" book spanning two continents, two cultures, two lives intertwined and it was perfectly crafted in a way where story telling couldn't be more pleasant reading.

It tells the story of Andi and Bernardo, two half-siblings parted by 7,000 miles and their individual anticipation and life stories after 16 years of not meeting one another except for one trip to the Philippines when Andi was little and had no idea or memory of Bernardo except in the pictures on the frames in their home in London.

While Andi was growing up in England, in another part of the world was her half-brother Bernardo who was growing up (really tall) in the Philippines. The contrast in setting is timely as many of our fellow Filipinos share the same "cultural differences" with the current trend of having more Overseas Foreign Workers seeking greener pastures, being uprooted from the native country and finally finding home.

Beyond the lives of Andi and Bernardo, however, Gourlay is able to weave into the 225 pages novel the Filipino culture of superstitions and myths and intertwining it with the lives of the people in the Philippines. It touches upon the hardship of Filipino OFWs who strive continuously to make each of their own dreams come true even in a land far, far away.

I am amazed at the story-telling prowess of Gourlay as the novel evolves into more than just sharing life stories from two vast perspectives, but keeps the reader laughing, smiling, and even teary-eyed at a simple story on life and love. It was written with a lot of heart poured into the story-telling. What is most amazing about the book is how one can practically immerse himself into the story and as a Filipino reading this, I am proud at how Gourlay was able to make me feel Filipino again.

Of course, there is the fact that the ending of the novel was quite abrupt. But I guess the message of the author was well delivered already from the first 150 pages of the book. Maybe I am used to novels that are as thick as Ken Follett's that seem to have to be saga after saga after saga. And while I am no Oprah Winfrey, I am, I believe, a better judge of the kind of books that are worth buying and reading.

I went to Powerbooks at the Alabang Town Center yesterday to get a few copies for my friends as gifts as well. Unfortunately they could not find a copy as they said they have it but don't know where they put it. Such a shame for a bookstore that splatters all foreign novels and promote so much foreign literature that they forget that they are a local bookstore and must put books as good as these on the front shelves to showcase to the Pinoys that beyond the foreign novels of Shopaholics and Stephen King or Dan Brown is a simple yet wonderful novel that every Pinoy should be proud of.

My hats off to Gourlay for a great novel. I am looking forward to more good readings like these. It's a "curl up in your bed" with a hot choco and cookies on a rainy day kind of reading. One that I guarantee will leave you feeling good - for a long time.

My review: Two thumbs and two toes up!

[And two thumbs down for Powerbooks and Fully Booked for being such a bitch and snob for books written by Filipinos.]
Posted by Kid at heart at 8:40 AM