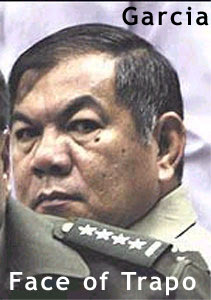 Former military comptroller Major General Carlos Garcia's P303Million plunder case has been dismissed after he pleaded guilty to bribery and violation of the anti-money laundering act - two lesser offenses he faces before the SandiganBayan. Of course, after he pleads guilty to these, he was granted P60,000 bail. On December 18, 2010, at 11 am, Garcia walked out of the PNP custodial center after serving almost 6 years in jail. Then there is talk of a compromise deal on the supposed return of the ill-gotten wealth. And that since he has served the maximum time for jail for an offense called bribery, he probably will go scot free.

The case of Garcia stemmed from the confiscation and eventual prosecution by United States authorities on trying to sneak in $100,000 in cold cash by his sons to the US. His wife Clarita, and all his sons - Ian Carl, Timothy Mark, and Juan Carlo - are US Citizens. They are co-accused in two cases against them.

A general in the Philippines does not and will never in his lifetime make that much money even if he dies in the line of duty. If you set the pay check of the President of the Philippines as the highest pay grade for government officials, well you can figure the math. He earns P37,000 a month. He is reported to have transferred P44M to the US in 11 years. Their family own several properties in the US.

The sequence of events leaves much room for cry for justice in the Philippines where those that are in power and those that have money have preferential treatment, are able to get better lawyers who go around the bush to find a way out of the corrupt practices of our government officials who steal from the coffers of the nation.

If the current administration is serious in its mission against graft and corruption, it must begin with this case. The wife and children of Garcia should be extradited and all ill-gotten wealth must be recovered, even if it means that the Garcias will be poorer than the poorest of the poor. It is, after all, the money of the people of the Philippines.

It should be done soon and swiftly so that it will serve as a lesson to others in government who will dare touch money intended for the development of its citizens and not the few who choose to steal and get away with it.

But justice in this country is wanting. The case of the Marcoses is a perfect example. And as long as we turn a blind eye at the the way money changes hands in exchange for justice, we will remain third world.

How many more lives and more Filipinos should live in poverty because those that are supposed to serve us steal from under our nose?

[For those interested in the whole story trail of Garcia's travail, copy and click on to this site

http://trapo.freeservers.com/garcia.html]
Posted by Kid at heart at 2:01 PM