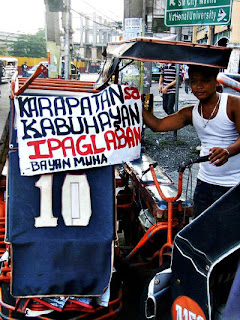 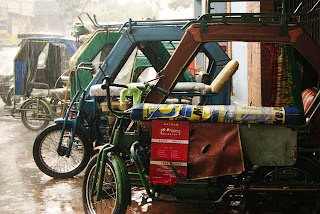 Short of sounding discriminatory, I will never probably understand what rights these "kuliglig" drivers are screaming justice for.

"Kuligligs" are makeshift pedicabs that are the new King of the Roads in the Philippines. Some smart-ass idiot had this bright idea that putting a tiny motor into the pedicab would convert this three-wheel tricycle into a "motorized" version of the pedicab. They are found in ALL areas of Metro Manila (and in the provinces as well) and seriously, have no respect for the rule of law when it comes to traffic. They counterflow, they load and unload in areas where they are not allowed to, they ply even major thoroughfares contributing to the already massive traffic jams, they are rowdy and have no vehicular insurance whatsoever, they have no license to operate and HENCE ARE ILLEGAL - in short, except for the fact that their drivers claim to owning and driving a "kuliglig" is their source of livelihood, they have no reason for existence as a public utility vehicle.

I was silent about this topic until another idiotic senator suddenly raised his concern and cause-oriented, pathetic fried brain cells (I guess it's like father like son), politically motivated plan to LEGALIZE the "kuligligs". It's barriotic, idiotic and infuriating that people even continue to vote for feeble minded persons like him into public office, just because his roots are well entrenched in the movies and media! Sanamagan this country! His father, who once ruled this country (before being deposed because of plunder), once thought of legalizing "jueteng" (an illegal numbers game) as well. You can tell how idiotic minds think alike!

So here's my take.

1. Poverty can never be used as an excuse for doing something wrong. "Kuligligs" are like termites. Once you start giving them a franchise or legalizing them, they just spread like wildfire. And like termites, it's hard to exterminate them. Even if you burn your house to the ground, they will just proliferate when you rebuild. This is what this government is like. Our bleeding hearts go out to the poor and the needy. And the majority of them take advantage of this. And when you try to fix the problem, like termites, they fight back with a vengeance, no matter how wrong the logic is. The Akbayan, Hukbalahap, Anakbayan, Commission of Human Rights and other cause-oriented groups now band together to make it seem that the termites have the right to existence, even if they don't. We cannot keep justifying a wrong by another wrong. It is not only moronic but immoral! It is the thought process of a Marxist or Communist that thrives on the empty bellies and empty heads of the poor and uneducated to feed on the convoluted idealism of equality.

2. Majority of the poor in urbanized areas are actually immigrants from the rural area. Armed with just their underwear and deodorants, they come to the city in search for greener pastures. Unlike the OFWs who dream to dream big, the "probinsiyanos" will live with relatives from the squatters area. They inculcate and imbibe the culture there. Armed with the artillery of survival, they learn the ropes and trades to exist in the urban jungle. Name me one city in Metro Manila that has no squatters area! Come on, I dare you!!! The politicians use these poor people to propagate their existence in the political arena and to create a political dynasty. Why do you think the Binays, the Ejercitos, the Marcoses, the Arroyos and so and and so forth stay in power for so many years? They hand down their local government position from father to son to grandson and they have no plans of leaving! They owe their position in power to the poor. And come next election, they will remind the poor of this. Ironically, those of us who have a better standard of living in the urban areas seem to need to adjust to the mindset of the people from the "boondocks". Why is that?

3. It seems that the sense of logic of our politicians has deteriorated if not left in the shit-house. While we are talking about rights here, what about our rights? Tax payers like us who contribute more to the government's coffers than the ordinary politician who makes a pittance out of their position in office and hide their true assets and liabilities from the peering eye of the public need someone to espouse our rights as well. After all, it is a fact that it is our money that is keeping these dumb politicians in office and it is our money that is keeping these poor people alive. As to how our taxes are spent (and whether they are spent well or not by the corrupt public official) is not our fault.

Each day, I traverse the harried streets of Metro Manila wondering how many tunnels, how many fly-overs, how many skyways, how many more roads we need to build to ease traffic in the metropolis. I know the answer. I've blogged about it time and again. No rocket science here. Simple discipline and logic - two things even government officials cannot simply carry out - are sorely lacking.

Enough of the bleeding hearts. For too long a time, is it too much to ask these government officials to consider legislating for us tax payers who put food on their tables?

As for the partylist government officials and the pathetic youth groups who seem to not find meaning in life, here's my message - GET A LIFE!

[For more blogs on kuligligs, you can go to
http://rah888.blogspot.com/2010/03/kuliglig.html
where the author rights an interesting article about this as well]
Posted by Kid at heart at 10:47 AM