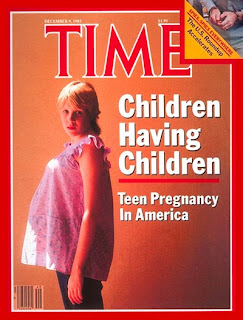 That's the age of puberty for most males.

That's the average age of menarche for females.

That's also the age of the mother of one of my patients.

She could not recall the events that led to her pregnancy. After a drinking spree in a party, she woke up to 6 high school boys sprawled on the bed. She casually picked up her clothes, got dressed and went home. She is a smoker, gets bad grades in school, has had 5 boyfriends and has her life centered on the internet 10 hours a day.

These details, I got from her obstetrician. Other obstetrical and gynecological history were vague as both the mother of my patient and her parents had clammed up.

I know that many of my colleagues in Pediatrics and Obstetrics will let you know that there has been quite a shift in the maternal age of pregnancy lately. When I started my pediatric practice in the early 90s, the average maternal age for first pregnancy was between 25-28 years old. At the turn of the 21st century, the average maternal age for first pregnancies in my practice dropped precipitously to 18 years old. It was also the same time that I noticed that I had a wave of patients from unwed women whose ages ranged between 12-16 years old.

One of TIME magazine's cover read "Children having children". Teenage pregnancies are intertwined in a social and psychological complex.

First and foremost is the fact that teenagers are not prepared to rear children. Both parents, especially if both are in their teens, are emotionally, psychologically, and financially unprepared for this kind of responsibility. Children are not dogs that cavort on the streets to deliver puppies later on. Teenagers who get pregnant are still in school at the time of pregnancy. Surely, the libido of both parties whose hormones are at its peak are probably at work here. But libido does not provide food on the table.

I can only blame media for the increased rate of teenage pregnancies. While media will always hide under the "first amendment" or "freedom the press", it cannot be underscored that they have played a major role in the formation of both good, bad and kinky ways of the public. Obviously, the greatest impact is on the most gullible - the young and the ignorant.

The advent of social networking and the world wide web has made predators of the young and foolish, curious and stupid, easily accessible. So you have both informational and pornographic sites accessible to the young and the restless.

Second is a personal observation. All (and that is not an exaggeration) of all my patients from teenage pregnancies have the worst pediatric visits in the clinic. The immunization status of their kids are incomplete. When the grandparents have time, they bring the grandchild to the clinic. And they pour their hearts out at how their lives have turned topsy-turvy since then. One grandparent had asked me to talk to her daughter and her partner (16 and 17 years old respectively) on taking on more responsibility as parents. I told her, "I can only provide some advice on child rearing, but the total responsibility rests on your lap, not mine." I mean, if her daughter got impregnated at 15 years old, who am I to be convince her to change the kind of lifestyle she leads? Shouldn't she have done that when she was rearing her daughter?

I have a patient born to parents who were 15 and 16 (mother and father), 4 years ago. After a year seeing them regularly, the visits became irregular. During the visits at the clinic, I was always exasperated at how they were not able to comprehend any explanation I provided during both the well and sick baby visits. Their major concern always was not at the explanation of the immunization benefits or the disease process and care for the sick child during the visits. It was more on the expense! I lost them to follow-up after 1 1/2 years. One day, I received a text message from the mother asking me what antibiotic they needed to give her kid because her kid's been sick for over week already. I told them (like I tell all my patients) that I would want to see them at the clinic (I am not a seer as most people think). After window shopping from one physician to another, I finally saw the patient a week after the last text I received. The mother had texted me the blood results of her daughter. I told them to get admitted. She was adamant at first, but she eventually gave in.

At the hospital, I told them that I was referring them to an oncologist because the peripheral smear had shown blast cells indicative of Leukemia. It dawned on me that while I was trying to pick my choice of words on how to gently break the news to the teenage couple (with the whole family listening to my dissertation), I could see in the eyes of the mother a lack of empathy and a feeling of emptiness. No tears were shed by the couple. The first question the mother asked me after I gave a 30 minute speech was - "so what are the medicines we will give her?" I was aghast because she did not realize the gravity of the situation. The conversation became stressful because the parents did not seem to grasp the devastating news. Even the oncologist had discussed the problem regarding the parents understanding the illness of the patient. After all, it would be a great responsibility in adhering to the chemotherapy schedule and the outcome of the treatment would highly depend on this.

After they were discharged, I never saw the parents nor the patient again. I hope that instead of forum shopping, they embraced the reality that their little girl will need treatment and that they learn to take responsibilities in life.

Finally, is the stern belief that unprepared pregnancies derails one's future plans and dreams. A pregnant teenager spends a portion of her life having to raise her kid(s) while trying to focus on her studies as well. I a firm believer that it's the girls that get the short end of the stick in this dilemma. Every teenage pregnancy has the girl on the losing end. Not only because the pregnancy cuts short their career paths but affects the chances of getting married later on or engaging in a relationship that will result in a successful marriage.

While a boy can claim that the sexual tryst may have been consensual from the get go, engaging in sex with an underage minor can constitute statutory rape if the parents of the female party will claim so. Girls will need to understand early on that their bodies are vulnerable and that an inadvertent sexual liaison can result in unwanted consequences of life changing proportions.

Girls (and boys) will need to understand that parenthood is a full time job that requires not only sexual acrobatics in the bedroom, but a commitment to raising children properly. No child deserves getting less than this because of irresponsibility or ignorance on the part of the parents.

Parents and educators need to instill sex education early on so that children understand the repercussions that can result from inappropriate sexual behavior. This is the part where I don't understand why the Church is so much against sex education early on in schools. Responsibility for caring for the youth and the young is one that is shared by all and should not be taken off context and with malice by Church officials.

This is a good age to just be carefree and enjoy the wonders of life.

This is a good time to celebrate that last year of being a child as one crosses over to his/her "-teen" years.

We need to guide and nurture our kids today.

Mark Twain said "It is a good idea to obey all the rules when you're young just so you'll have the strength to break them when you're old."
Posted by Kid at heart at 1:45 PM