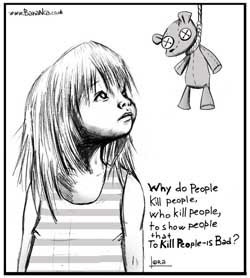 What makes a child grow up to be cruel and manipulative?

This was the question posted to me by the mother of a patient. The parents were concerned about their nephew (let's call him R) whom they thought had a psychiatric problem. During the consultation of their child (let's call him B), I was wondering were the 7 year old B got the ugly bruise on his chest. His 15 year old cousin R was the culprit. The parents of R had begun to worry about B playing with his cousin whom they felt were bullying him. They noticed this happening about a year ago when B came home with a lump on his head. He said that R had hit him with the baseball bat. When R was confronted, he showed no remorse and gave an excuse that B deserved it because he had touched his "stuff". From then on, they asked B to stay clear of R. But as children would have it, kids will always forgive early...only to suffer again later.

I am not a psychiatrist and did not delve into the dynamics of R. It was this recent consultation that I found strange because this time the parents of R came along. They were concerned that their son had a "mean streak" and that he seemed to be oblivious of other people's pain. They have received several complaints from the school officials that the boy had been causing some raucus, such as decapitating a cat, throwing wet toilet paper on the ceilings and writing graffiti on campus walls. He would be caught stealing things belonging to other people.

This was not a simple case of behavioral or conduct disorder.

From the discussion I had with the parents of R, he exhibited key characteristics of a sociopath:
1. no conscience
2. felt no remorse for what he did and does not care about other people's feelings
3. behaved as his the world revolved around him and thought other people existed for their own benefit and did not have the right to exist
4. treated other people as objects and is a "control freak"
5. hurts those nearest and dearest to him
6. monumentally self-important and thinks that he has great control over the world
7. habitually dishonest
8. is abusive in emotions and is highly manipulative
9. gets "off" committing acts bordering or are considered criminal in nature and has hypersexual preoccupation unusual for age
10. no empathy for other people or living beings

A sociopath is one of the antisocial personality disorders (APDs). When Pinoys label you as "anti-social" they don't actually mean that you're a sociopath. It's probably because you refuse to mingle with the crowd. The DSM-IV of the American Psychiatric Association defines APDs as "...a pervasive pattern of disregard for, and violation of, the rights of others that begins in childhood or early adolescence and continues into adulthood."

The key words here are: pervasive pattern, violation of rights of others, and begins in childhood.

Many of the parents think that their kids are probably "simply misbehaving".

The root problems of APDs stem from both environmental and genetic factors. Although the individual must be 18 y/o before one can make a diagnosis of APD, adults diagnosed to have APD are more often than not diagnosed to have conduct disorder as children.

I am glad that parents are taking a more pro-active stand on recognizing mental disorders among their children and seeking help. Physicians (pediatricians in particular) should be able to recognize behavioral, conduct and personality problems in their practice early on. After all, our practice is not simply checking whether the kid needs an antibiotic or it's time to give the next vaccine for their well child visits. In the routine out-patient clinics we have, it would be good to recognize tell-tale signs of problems among the kids during their clinic visits. You can strike up a little conversation with parents on how little Juan or Juanita is doing in school and observe his or her relationship with the parents and other children in the waiting room. Body language reveals a lot of information and our eyes are one of the best diagnostic tools for a quick physical examination of what's going on with the child.

The World Health Organization (WHO) uses the term Dissocial Personality Disorder in place of APD. It is characterized by 3 of any of the following:
1. Callous unconcern for other's feeling and/or lack of empathy
2. Gross and persistent attitude of disregard for authority and laws/rules/regulations
3. Incapable of maintaining enduring relationships
4. Very low tolerance to frustration and low threshold for aggression discharge (including violence)
5. Incapable of guilt feelings and does not profit from punishment of any form
6. Usually blames others or offers plausible explanations and rationalization for the behavior bringing the subject into conflict
7. Persistent irritability

While there may be subtypes of antisocial behavior, it is important to remember that anxiety disorders, personality disorders, depression, narcissism, somatization and substance abuse are closely related with APD and that patients will benefit from an over-all assessment rather than simply diagnosing the individual as one particular disorder.

While the American Psychiatric Association has removed the clear demarkation between psychopathy and sociopathy, evidence in the literature demonstrates that criminals fulfill most if not all the criteria of an antisocial personality disorder.

David Lykken believes that sociopaths have normal temperaments, unlike the psychopath. The psychopath has a negative temperament which makes him engage in risk-seeking behavior and is unable to internalize social norms. The sociopath on the other hand have a personality disorder due usually to parental neglect, abusive environmental set-up, peer delinquency, and either extremely high or low intelligence. Either category, however, is probably an interplay between environmental factors and genetics.

The problem here is that most patients with APD respond poorly to interventional therapy. Medications can address some of the co-morbid social and/or mood disorders associated with the APD. No clinically controlled studies are well established to improve outcome of patients with APD. It's one of the theories why criminals diagnosed with APD have poor outcome in spite of rehabilitation. Which means that either incarceration or any other punishment for the criminal offense has no remedy. When these people are released from prison, they simply commit the crime all over again. Usually, the next criminal acts escalate to the point of being fatal.

I've always believed that children are like seedlings. We plant them on either good or bad soil and watch them grow. How we take care of them during their growth matters a lot on their outcome in life later on.

It is good to remember:

[For more information on criminality, gangs and street crimes and the roots of sociopathy among criminals, you can reference http://people.missouristate.edu/MichaelCarlie/what_I_learned_about/GANGS/WHYFORM/pathological.htm]
Posted by Kid at heart at 1:38 PM