Milan - of shopping paraside and home to our OFWs!

After my Greek holiday, it was time to do what I love to do best - shop till I drop.

The EasyJet flight from Santorini to Milan, Italy was a 2 1/2 hrs and we landed at the Malpensa Airport on time. EasyJet is a budget airline. But for the 89euros I paid for, inclusive of 1 baggage check-in (20Kg) and Speedy Boarding (both of which you had to pay separately), the fare was a reasonable one. They board all the "speedy boarders" first on a separate bus (and there were like 10 of us only). When you get inside the plane, it's a free for all seating arrangement, which wasn't too bad at all. And like Cebu Pacific (low budget airlines), everything - from food to water - had to bought.

EasyJet lands at the Malpensa Airport Terminal 2. There's nothing in Terminal 2 though. If you needed to get a ride to the Central Station in Milan, you'd need to go by bus. If you wanted to take the train, you'd still have to take a bus ride to Terminal 1 (about 10 minutes away) then take the train to the Cardona Station in Central Milan. Or you can go by cab - which is about 60 km away from the airport to the hotel - on a fixed rate of 90euros (one way). It seemed kind of difficult to be lugging those luggages up the bus, down the subway, up the subway, down the train, and into the street just to get from point A to point B. And since, I'm not in an Amazing Race contest, I just took the cab.

Camperio House Suites and Apartments was home for the next few days. Camperio used to be a former convent but has recently undergone renovations to being both a hotel and a residential area. The Deluxe Suite was homey and comfy. It had the luxuries of a 5 star hotel and of course, since space in European hotels is really small, the suites at Camperio was sprawling by European standards. 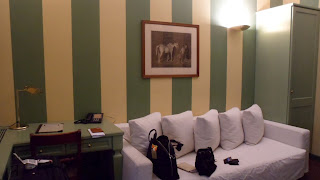 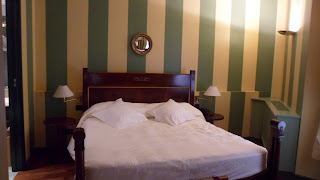 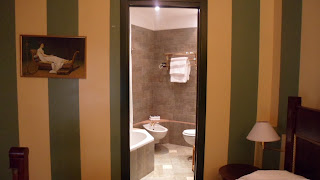 Location of Camperio Suites is excellent as it is not found on the via Dante (which is the main road of all the hotels and shops on Duomo), but is very close to the shops and all the major attractions of Milan proper. 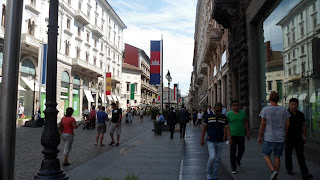 It was a stone's throw away from Louis Vuitton, Gucci, Prada, D&G, Versace, Emporio Armani not to mention the middle and lower end stores H&M, Zara, Mango, etc. Literally a shopaholic's nightmare. Coming in the summer season was the perfect time to shop, with most of the shops (except the high end ones) on 50-70% discount!

On C. So. Vitt Emanuele, one will find the LaRinascente (the equivalent of our Rustan's in the Philippines), a 7 floor edifice that not only houses the most exclusive brands but also the most expensive chocolates in the world - Amedei!

Fronting the LaRinascente is the fabulous Duomo. The intricate design of the Duomo - from the delicate carvings and sculptures on the steel doors to the exterior and interior of the building will hold you (as it did me) in amazement. 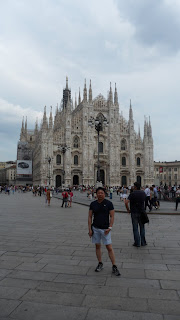 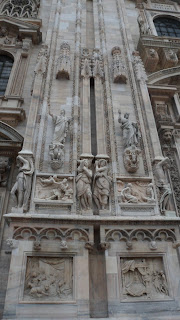 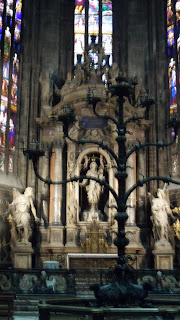 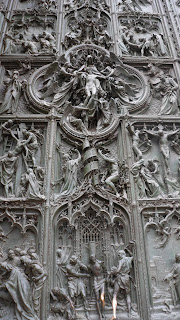 The main objective of the side trip to Milan was to shop...till I drop and shopped till I dropped I did. It was not a surprise that there were quite a few Asians in the various shops. But the Italians were extra nice to us, considering that we were on a buying spree. 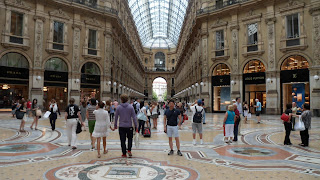 On my way home from the stores, I noticed a flock of Filipinos walking and chatting the night away. You could tell that they were Filipinos because they were speaking Tagalog. I was telling my partner that you could feel their loneliness in a far away land like Italy. The other day, when we arrived, we noticed two Pinays tugging a bag in the middle of the road. I could not tell if they were coming or going, but it was clear that they were domestic helpers lugging their only possessions in Milan. I mention them in my blog today, not because I look down upon them. Rather, I salute them because I can feel their loneliness and weariness amidst the pompous edifices and rich heritage of Milan. In the midst of plenty, are our Filipinos who trek the road more traveled by many of our countrymen in search of greener pastures for their families. The sacrifices they make, and the dreams they pursue.

Somehow, this vacation has been educational, relaxing, and a learning experience. Perhaps, sometime in the future, we will see many of our countrymen not have to leave the Philippines in search of a better future, but in search of a grand vacation.
Posted by Kid at heart at 5:14 AM