Onboard Qatar Airways, I left Manila at 0100 for my flight to DOHA, then DOHA to Athens. Athens is the first city in my 2 week vacation.

While recuperating from a very bad bout of Atypical Pneumonia infection just last week, I could not wait to get all my bags packed just to simply - get away from it all. After several hectic weeks, it felt like the world was finally caving in on me. All the stress and pressure from work was pouncing on my flailing immune system.

Qatar Airways has always been an on-time airline. Aside from the fact that I love its flat-bed (and I mean 180 degrees flat) with matching pajamas, slippers, duvet blankets, Molton Brown vanity kit and 5-star cuisine, with over 770 AVOD movies, music and games on your personal 15" touch screen TV and head-sets that had a noise-cancelling property, what else was there to ask for even if the flight would be more than 17 hours?

As in every European trip, it's always good to remember that there's no such thing as filling up entry forms when traveling to Europe. Their visa (which although is multiple entry) is usually only single use.

The temperature is scorching hot in Athens at 36 degrees celsius. 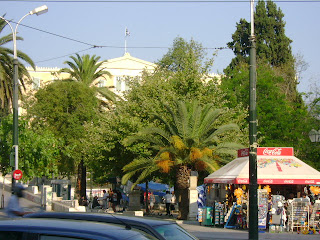 So not everything goes as planned. The taxi drivers are on strike in Athens (which meant that I would need to do a lot of walking if I wanted to go from point A to point B). I wanted to get a prepaid SIM card when I arrived, but lo and behold, most of the stores in Athens close at 3pm because it's a MONDAY!!! I went to one of the bigger stores and the salesgirl told me that in Athens on Monday, most of the retail shops open from 9AM-3PM.

The Grande Bretagne Hotel is one of the most (if not the most) grand hotels with a long history in Athens. It faces the Parliament House where you can virtually see from the hotel lobby the changing of the guards every hour on the hour. 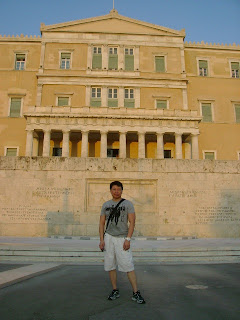 Upon arrival, I checked in my bags and needed to walk to the Kolonaki, which is about 2 1/2 blocks from Syntagma Square, for my lunch. On recommendation of my concierge at the hotel, PRITANLON was a good place to eat. And PRITANLON did not disappoint. The Greek Salad and Seafood Spaghetti was more than two people could finish. 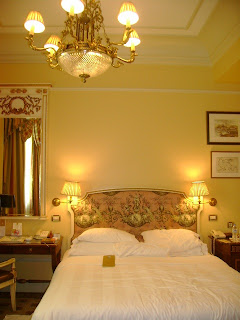 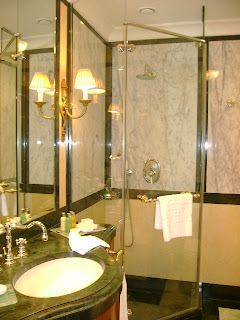 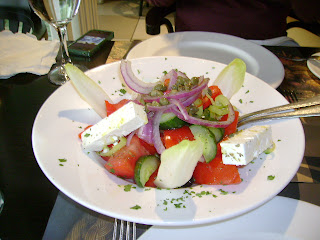 The Grande Bretagne Hotel will be home for the next 3 days.

Dinner was at CIBUS, a quaint restaurant in the National Gardens where you could just literally watch day change into night around 9PM. And you'll know it's night already because the Parthenon on the Acropolis literally lights up! 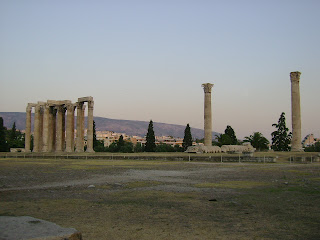 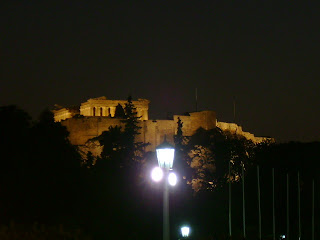 And while it can be literally dehydrating to sightsee Athens in this heat, I'll try my best to get the best out of my first leg in Athens.
Posted by Kid at heart at 12:45 AM