Cancer - the in thing? 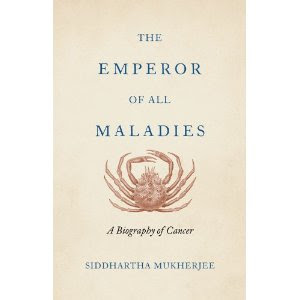 Another one of my friends had succumbed to Cancer. Another one bit the dust. When I told my partner about this, his reply was "It's the In Thing".

On my trip to Europe last July, I had bought my copy of "THE EMPEROR OF ALL MALADIES: A Biography of Cancer" by Siddhartha Mukherjee at Fully Booked, for the long haul read. The 571 pages (actually 472 pages of an excellent dissertation and approach to the origins and current knowledge of cancer and 99 pages of references and bibliography) provided a radically new approach to understanding the malady that has afflicted humans since time immemorial.

Cancer is not something new. Siddhartha writes with poetic brilliance as he describes his own insight into patients he currently sees and then intertwines the history of cancer to its first documented beginnings. He truly deserved the Pulitzer Prize for the writing of this book.

"Recall Atossa, the Persian queen with breast cancer in 500 BC. Imagine her traveling through time - appearing and reappearing in one age after the next. She is cancer's Dorian Gray: as she moves through the arc of history, her tumor, frozen in its stage and behavior, remains the same. Atossa's case allows us to recapitulate past advances in cancer therapy and to consider its future. How has her treatment and prognosis shifted in the last four thousand years, and what happens to Atossa later in the new millenium?...In 500 BC, in her own court, Atossa self-prescribes the most primitive form of a mastectomy, which is performed by her Greek slave. Two hundred years later, in Thrace, Hippocrates identifies her tumor as a karkinos, thus giving her illness a name that will ring through its future..."

Perhaps the literary ingenuity of Siddharta in this non-fiction novel is how he has pored through voluminous published literature and historical facts on the origins of cancer and managed to write it in a way wherein even laymen that read this book would be highly engrossed in the vivid explanation of cancer diagnosis, treatment options, drug discoveries and outcome.

Advances in cancer have come a long way since Queen Atossa. It has taken centuries to reach where we are in the science of oncology, and we still have a long way to go. While we slowly discover that there are risk factors that eventually cause cancer (some of which was the normal "trend" decades ago, such as smoking and binging on alcohol), we also now discover on which type of patients are at highest rate for cure and who are genetically predisposed to poorer treatment outcomes.

"Cancer, then, is quite literally trying to emulate a regenerating organ - or perhaps, more disturbingly, the regenerating organism. Its quest for immortality mirrors our own quest, a quest buried in our embryos and in the renewal of our organs. Someday, if a cancer succeeds, it will produce a far more perfect being than its host - imbued with both immortality and the drive to proliferate. One might argue that the leukemia cells growing in my laboratory derived from the woman who died three decades earlier have already achieved this form of 'perfection'."

"Taken to its logical extreme, the cancer cell's capacity to consistently imitate, corrupt, and pervert normal physiology thus raises the ominous question of what 'normalcy' is. 'Cancer', Carla said, 'is my new normal', and quite possibly cancer is OUR normalcy as well, that we are inherently destined to slouch towards a malignant end. Indeed, as the fraction of those affected by cancer creeps inexorably in some nations from one in four to one in three to one in two, cancer will, indeed, be the new normal - an inevitability. The question then will not be IF we will encounter this immortal illness in our lives, but WHEN."

And as man fights to survive aging and strive for longer lives and search for the fountain of youth or the drug for immortality, so will the cancer cells that live normally in our bodies, waiting for the time to take us to be part of the next in thing.

This is a must read for all, especially my students and all students and practitioners of medicine. It makes you understand and realize the wealth of knowledge in the discovery and researches in an aspect of medicine that we see in our daily lives.