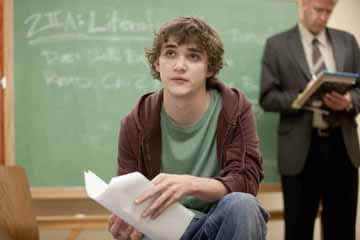 On my flight from Osaka to Manila via HongKong on board Cathay Pacific, I had hundreds of movies to choose from on their AVOD. Flipping through the list of films in the catalogue, I read a snippet of the film "Beautiful Boy". I've never heard of the movie nor either seen any announcement of it having been shown in the Philippines, I decided to while the time away with this movie over dinner 36,000 feet in the air.

Winner of the 2010 Toronto Film Festival, "Beautiful Boy" stars Maria Bello and Michael Sheen. It's a gripping drama of a middle class couple Bill (Sheen) and Kate (Maria) Caroll who try to find meaning and explanation in their lives after their only child, an 18 year old son massacres 21 people in his school before killing himself.

The movie is fast-paced and well edited. Directed by debuting director Shawn Ku, it departs from the usual massacre movies where the center of the film are the gore and the debauchery. Rather, it psychologically probes into the lives of the parents of Sam who need to deal with the aftermath of the tragedy rather than the lives of the victims.

In a different take from conventional films, the whole plot of the movie revolves around Sam's parents in the aftermath of his crime. Over the next hour, the movie unravels the many whys, hows and what ifs as a rewind in the minds of Bill and Kate, that eventually led to this tragic incident. Their anguish is hidden deeply to the point of denial.

And perhaps like many parents who try to make sense of the world and the children they rear, this was one senseless act where reasons could not just be swept under the rug. Like the Carolls, many of us try to erase guilt feelings, rationalize our rage and despair, and adapt various coping mechanisms so that we can transform our lives to living the way we want to. It is human nature to want to see things the way we want to and the way it ended. We want a piece of Nirvanah or Shangrila or beautiful endings to our life's journey.

The film leaves more questions than answers. Perhaps it is this compelling feeling of challenging our feelings and experiencing with the Castells the pain they were going through in trying to make sense of the whole tragedy that made this movie a unique one.

It makes us look at life differently and takes the hardest part of accepting and letting go, forgiving and forgiveness to the next level.

It's not one of those "feel good" films. It is powerful enough to make you walk away with a disturbing feeling. It is not meant to make you empathize with the Carolls. It is admirable because it leaves you breathlessly enthralled enough to make one reflect on the many denials we have in our lives.

It's a beautifully disturbing piece of work that everyone must see and change our perspectives on denials and forgiving.