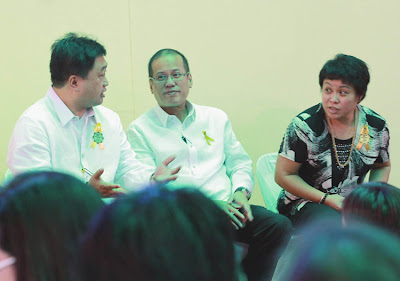 To my knowledge, as a private citizen, I am not obligated to inform the government IF and WHEN I travel outside of the country. You are not my employers and I am not indebted to either of you or any other public servant for that matter. Which means that my taxes pay for your salaries and benefits and other perks which you and of course other public officials and employees enjoy.

In short, it is none of your business when I decide not to hold clinic, when I need to attend meetings out of town or as required by my specialty society or any private legitimate social organizations of which I am a respected member of, when I decide to go on vacation and the like. But you can correct me when I am wrong. If I am, I will publicly apologize.

I am officially informing you through my blogsite (you may not be an avid fan, but neither am I an avid fan of yours, so the feeling is but mutual) that I will be in a meeting in Osaka, Japan on September 7-9 and September 20-22, 2011. I will also be speaking in Iloilo on September 14 and in Bacolod on September 27. Which means that I shall not be holding clinic on those days. In short, it also means that the people from the Bureau of Internal Revenue (particularly the ones from the Muntinlupa district) who do the tax mapping at the hospitals should not look for receipts on days I do not hold clinic or am not in town. I cannot manufacture fake patients just to make you people happy. I am not required to explain to you where I go or why I do not hold clinic.

I am writing this because of an incident that occurred last August when my clinic was tax mapped. The assessor indicated my violation was that I did not issue receipts from July 18-July 31, and was required to pay the fine of P10,000 (for first violation??!?!?). When my secretaries saw the violation form, they informed the assessor that I was out of the country (I was in Greece and in Milan - hindi lang kayo ang may karapatan mamasyal) from July 17-29. The assessor informed my secretaries that I should just write and explain myself and show my passport to the district office!?!?!?! So I had to write to the District Officer and had to spend for photocopying my Schengen visa, passport, dates of entry/exit to Greece and Italy and dates of exit/entry to the Philippines. It was not a matter of having to explain my having to go on vacation or photocopying all documents (kung sabagay hindi ninyo pera at oras yung naperwisyo ninyo. Pag dating sa daming oras na walang ginagawa eh diyan magaling ang mga nasa pamahalaan). It was a matter of being inconvenienced by some moronic government employee who performs the task of harassing common citizens like me.

I know you people have a pet peeve towards doctors and lawyers and other professionals who you think are cheating the government by not properly paying taxes. You said it yourself in your SONA. While there may be some bad eggs among our colleagues, we are not all the same. Let's just say that I give the benefit of the doubt (of course more doubt than benefit) among government officials as well. (Pare-pareho lang tayong may bulok na itlog sa ating propesyon. Sa totoo lang, mas madaming magnanakaw sa inyong sanhi kesa sa amin. Kung tutuusin, eh magkano lang ang suweldo ninyong lahat sa pamahalaan pero sandamakmak ang nagpapakamatay para magkaroon ng puwesto kahit bilang isang kagawad sa barangay! Dahil may kurakot! Dahil may inanakaw! At pera namin ang inyong ninanakaw!.) While you may not all be crooks (I think I'm humoring myself), I certainly don't go around checking who's in town and who's not and who's supposed to be in session in Congress or who's just boxing around the world for a profession and is a congressman on the sideline. Nevertheless, the feeling is mutual. I look upon government officials with an ounce of honesty and a kilogram of ineptness and skepticism.

Being realistic about the scenario, some of the doctors and lawyers who "tax evade" through dubious means are actually small fry compared to the circle of friends who traveled with you to China in your recent trip. We are small fry compared to your circle of colleagues and their wives and children who make a pittance from their government salaries and yet tag along LV or Prada or Hermes bags. In short, your idea of filling in more of tax collection in the Philippines by running after these professionals is but a drop in the bucket compared to the real big-time tax evaders whom the government simply cannot or refuse to touch. Even if you make a case against these people, they have the money to battle it out in court and with the way the justice system in this country works, well, you'd both be dead by the time anything is resolved. So you go after the small fries. (Yun lang naman ang kaya ninyong patulan eh).

But I support you in your endeavor on looking for tax evaders and people paying taxes correctly. What I cannot stand, however, is how even the honest tax payers get the brunt of inefficiency on the part of the bureau. Bluntly speaking, you people are barking up the wrong tree and are totally clueless on how to collect more taxes from the appropriate sources - like liquor, cigarettes, other vices and luxury goods.


Of course, since I'm not the president nor am I the commissioner of the Bureau of Internal Revenue, I will not tell you how to run the country or the bureau. I am, however, informing you that I will not be in town on these days and that if I get a report again from some idiotic tax mapper or assessor within the area, for not issuing official receipts when I am not around or when I do not have patients for the day, I will not hesitate to take the government to court on charges of harassment. There should be no next time around. I am almost about to retire and will have my whole life ahead of me and more time on my hands to see you people in court.

This is not a threat. It is a promise!

Yours truly
Posted by Kid at heart at 2:10 PM