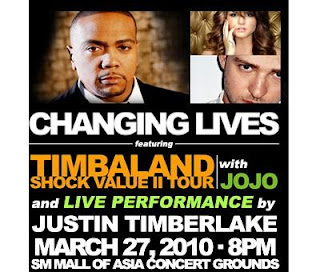 Alright, so nothing is perfect!

Upside of the concert first.

1. Justine Timberlake was there. And as I thought the guests at the concert were going to sing just 2 songs, JT brought the house down with a 45 minutes performance together with Timbaland and solo, some of the coolest rap and pop that I've ever heard. Mind you, I have heard of JT, but last night I became an instant fan. (I loved his profanity as well. They came at the most unexpected parts of the concert.)

2. The fireworks at the last song of JT and Timbaland was a show stopper. People could not figure out which to watch - the concert or the fireworks! But good job!

3. This was for a charitable cause. For the victims of Ondoy and Pepeng. For a school displaced because of the storm. For lives that were lost and needed to be rebuilt. The drop in the bucket from the concert goers and organizers would indeed go a long way.

And now the downside.

1. It was a long wait. Which is why I can't stand concerts that make people pay and make you stand up the whole time. Of course, this minimizes the cost and ups the allowable number of people, to which I don't mind. What I do mind is that when you say the concert begins at 8PM, it begins at 8PM and not at 930PM. Especially when you pay a hefty sum, but stand up.

No matter what Timbaland did to keep the crowd upbeat, many in the audience couldn't keep up in the standing position up to way past midnight. Sure, while many of them still help their hands up high and screamed to JT during the last minutes of the show, you could tell that even if the "spirit was willing, the body was not".

No excuses. When you put the time for a concert, you follow the time. The prima donnas, can just roll over and die.

2. All concerts in the future should have NO DRINKING and NO SMOKING!!! The little crowd in front of us (which included some beer guzzling boys and chain smoking bitches) were polluting the crowded area with their smokes. While I have nothing against people with vices, they should do this in the confines of their privacy.

There were prepubescent teenage boys on the left side that were puffing cigarillos as well. Darn, they still didn't have pubic hair but seemed to have vices. And the fat girl to my right, was just a handful. She kept laughing and flirting and twirling her head that her ponytail kept hitting my face. I just wanted to slap someone that night.

I don't know, but even in concerts, their ought to be some decent boundaries, no matter how indecent the show is. After all, we all bought the same tickets and most of us wanted to watch the show, rather than to show off.

3. Finally, Jojo was such a disappointment. While I may not be familiar with her songs, she was out of tune and desperately needed to get pulled out of the stage! After two songs, she was gone. Good riddance! You didn't even hear the crowd ask for her again.

While there were a few glitches in the show, particularly on how late it really started, overall, it was a great concert. While I'm not particularly a fan of hiphop and JT, this was one concert I was glad I was dragged into watching. The heart thumping, crowd popping, dancing performances in spite of the LCD setbacks, was a thrilla to remember!

And, after standing for more than 4 hours in the Changing Lives concert, I will need that massage from Mandarin Spa.
Posted by Kid at heart at 10:45 AM

1. It was a long wait. Which is why I can’t stand concerts that make people pay and make you stand up the whole time. Of course, this minimizes the cost and ups the allowable number of people, to which I don’t mind. what I do mind is that when you say the concert begins at 8PM, it begins at 8PM and not at 930PM. especially when you pay a hefty sum, but stand up.