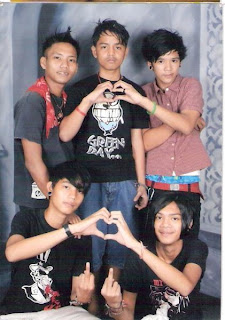 
If you were able to understand the sentence above, you must either be infected with Jejemon juice or or Jejemon yourself. You will need to see a priest to get exorcised from this illness as there is no cure for Jejemonitis.

There has been an email circulating about the evolution of the jejemons. I will not be repetitive of what has been published in that email circulation. This is simply added data after one of the jejemons was captured by the government when he refused to write his name in the correct spelling during his class. He was subjected to torture by the military and after dissecting him alive, they found out the following.

While they claim to be homo sapiens, more recent studies say they most probably are only limited to Filipino ancestry and descendants of parents who have a history of mental disease and poverty combined.

They are creatures of the night, flourishing from midnight to 4-5am. They are usually sighted in Friendster and Facebook and are highly accomplished in techie world, but are highly lacking in comprehension and spelling. The latter is perhaps the reason for the need to create a Jeje language. Their brains are highly lacking in neurons and most parts of the brain is undeveloped, explaining their state of mental retardation. It is theorized that the infecting mechanism of Jejemonism is through multimedia. The internet is the most rapid form of contamination with almost 10,000 victims a day suffering from mild to moderate infection of Jejemonism.

According to the parents of the boy captured by the government, he was normal until he had met his Jejemon classmates and began haning out with them. It was theorized that "Jejemons are generally thought to have very low IQs, although this claim still remains unproven. This might be due to the failure of the Jejebrain to produce and terminate brain cells than that of the normal rate of average human beings. Extreme head heat (which have been thought to decrease brain size) while wearing gangsta caps and gangsta shirts and 24/7 beer diets have been also attributed for the Jejemons' low IQ levels." The captured boy is of average intelligence but because of family problems, albeit too much depressive environment in the home, he had found a better source of happiness in the Jejemon classmates.

While the main media of the Jejemons has been the typical computer and mobile phones, the newest Jejes on the block are getting more aggressive penetrating the population through the ABS-CBN noontime show called SHOWTIME and using netbooks and the iPAD as newest sources of spreading their disease. The newest Jejes do not hang out in internet cafes anymore. They just stay at home and while their time away in front of the computer, most likely wearing their gangsta hats and soiled 3 day underwear.

When the Jejemons get to hang out together, they're usually sexually preoccupied and most of them practice unsafe sex and are bisexual. Do it with the Jejeboys and Jejegirls. They actually cross-link themselves as species of males and females with homosexual inclinations but are unsure if they want to be gay boys or lesbians. All jejemons have engaged in some form of sexual activity before they even have secondary pubic hair sprouting. Again, the sexual promiscuity is dependent on the age of infestation of the jejemon virus. And the replication of the jejekids are far and few because of the confusion of the jejemons over their sexual preference.

To date, these are the latest scientific data extracted from the autopsy findings of the government on the jejemon boy who was captured and tortured in order to reveal more evidence of jejomonism and how to counter this rapidly advancing disease.

I cannot stand the Jejemons.

They are Pinoys who have never seemed to channel into more productive means their time. They have bastardized the way grammar and spelling should be taught or learned. And we have supposedly normal people who put these idiots on a pedestal, for building a new "way" of life for the Jejemons! My God! How more pathetic can this country with people supporting these nincompoops?

The Department of Education has banned the use of Jeje language in schools, but like a disease that has infested man, these Jejemons will not disappear rapidly? They have created a world of their own and have started to engage people in whatever age and social class to imbibe their "culture".

The only way to stop them is to make sure that once a Jejemon is caught, he is castrated for good. There should be no Jeje-offspring from this method of elimination. This will be the only way to make them extinct!
Posted by Kid at heart at 7:04 PM